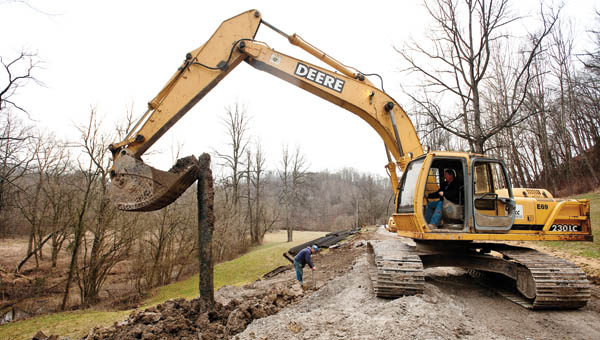 Employees from the Lawrence County Engineer’s Office spend the morning working on a road slip on County Road 52.

The Lawrence County Engineer’s Office is coming into the backstretch of repairs that have taken almost two years to complete caused by the massive rains in May of 2011.

“We are waiting on a drill bit to finish up some small (landslide repairs),” Lawrence County Engineer Doug Cade said.

Work is expected to continue this week on County Road 52 at the two-mile marker and 7000 County Road 6.

The floods of 2011 caused approximately $12 million in damages, either by sending hillsides onto county roads or washing away bridges.

Right now 80 percent of the landslide repair work is complete, according to Cade.

Besides the work on County Roads 52 and 6, there are a few more repair jobs to bid out. The majority of the landslides have been repaired with county crews. However some of the larger projects had to be bid to outside companies.

The majority of the projects are eligible for funds from the Federal Emergency Management Agency that will cover 75 percent of the cost.

Only a few months after the rains investigators from FEMA came multiple times to look over the damaged sites consolidating them into 187 projects. Besides FEMA funding, some of the projects are eligible for funding from the Natural Resource Conservation Service or the Federal Highway Administration.

“Naturally it never goes as quickly as you would like,” Cade said. “It was a very large storm and the magnitude of damage. Our highway workers have done a tremendous job to get the work done and then keep up with the rest of their work.”

Also focusing on Rockwood eyesores A grassroots volunteer group with a proven track record for cleaning up and beautifying the... read more