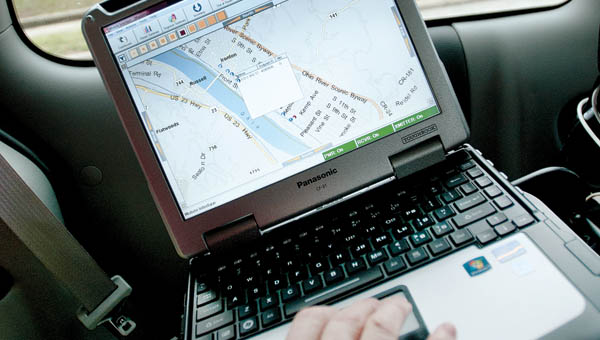 An average day for a Columbia Gas meter reader in Ironton used to consist of walking from home to home, business to business, looking at the gas meters on the outsides of the buildings. In some cases, meter readers had to make appointments with homeowners to read those meters that were inside the homes.

About 300 meters could be read in one day.

Now, the same workload only takes a few minutes.

As the white minivan drove down South Third Street in Ironton, Sandy Ross, AMR project coordinator, heard her laptop beep and saw the tiny dots disappear from the map on the screen, indicating a gas meter reading was collected.

The ARM devices use radio waves to send a signal to the van, which is equipped with GPS, an antennae and computer, mounted much like in a police cruiser. When the gas meter has been read, the dot on the screen disappears and the data is stored.

Ross said it used to take an Ironton meter reader two months to cover the entire area, but now the work takes about a month.

“It could actually be shorter, but we don’t want to change the billing cycles,” she said.

The project to install the devices in Ironton and surrounding areas began last September and went live Feb. 28. About 75,300 meters in Ironton, Hanging Rock, Proctorville, Portsmouth, Wheelersburg and Gallipolis have been replaced and cost about $4.2 million. In all. Nearly all of Columbia’s 1.4 million customers will now have their meters read automatically.

Shane Cartmill, Columbus external affair specialist for southeast Ohio, said the change is a part of Columbia’s “Doing More for You” campaign and eliminates two of the customer’s biggest complaints.

The first problem eliminated is the need for someone to be home to read indoor meters, Cartmill said.

The second being every-other-month estimated bills.

“Although we are very confident our estimated reads are accurate, there will be no more need for adjustments,” Cartmill said.

Cartmill also ensured the AMR systems would not interfere with home electronic equipment, nor will personal information be transmitted during meter readings. Each meter has a unique identification number and is not linked to sensitive information like account numbers or people’s names.

The investigation conducted by the deputies began after the sheriff’s office received an anonymous call at 6:45 p.m. Thursday of... read more