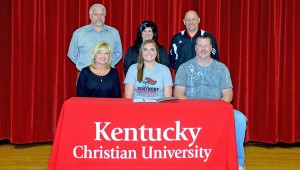 PEDRO — When Tommi Butler decided she wanted to play volleyball at Kentucky Christian University, it was a lot like putting on a surgical glove.

Butler and Lady Knights’ head coach Bruce Dixon were both in agreement that the Rock Hill Redwomen senior volleyball standout was just right for the team’s roster.

“Everything just fit with the players. I really liked all the girls a lot. It was close to home, it was an opportunity to play volleyball and they have an outstanding academic program,” said Butler.

“It’s something I’ve always wanted to play after high school.”

Dixon said once he became aware of Butler and the preliminary contacts were made, she was invited for a visit and everything just fell into place.

“We invited her and she came in and really meshed well with the players. It seemed like a real good fit,” said Dixon.

“Her volleyball skills are where we feel with work and effort, she can be a good player. It’s up to her to make it happen. I’m very pleased to have her.”

The Lady Knights were 26-6 last season and earned a berth in the National Christian Collegiate Athletic Association tournament and they finished third in the nation.

Butler is fully aware of KCU’s success and is prepared if she has to sit and wait for her opportunity to play.

“(Coach Dixon) is going to get a (junior varsity) squad, so I’m hoping for a chance to get some playing time and experience. If not, I know my place as a freshman,” said Butler.

Although Butler would like to play middle hitter, Dixon said her position would be determined by team need. Regardless, Butler knows it will be an adjustment.

“There are a lot of factors. I know it’s going to be more intense and quicker plays. It’s something I’ll have to adjust to,” said Butler.

“I think it will be a good experience for her. She’s ready,” said Ferguson. “She worked really hard. That was her goal to go someplace to play.

“We had a great season and she was a big part of it. She’s bright and a an outstanding student. She’ll do well.”

Besides volleyball, Butler was also a member of the Rock Hill girls’ basketball team. With her basketball career completed, she plans to utilize her newly found free time.

“It was a good way to stay in shape with basketball, but (at KCU) I’m going to work on volleyball year-round,” said Butler.