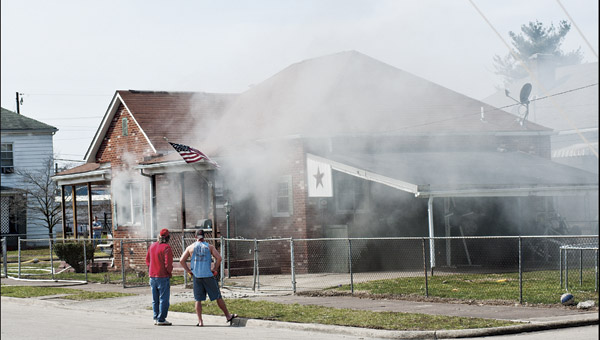 THE TRIBUNE/JESSICA ST JAMES
Two local residents stand along Ashtabula Street, in Ironton, as they watch a neighborhood home on fire Sunday. The fire started before 2 p.m. at 403 Ashtabula St. No one was home at the time of the fire.

Ironton Fire Department firefighters were on the scene for two hours at a house fire that broke out early Sunday afternoon.

A call came into the fire department at 1:46 p.m. that a blaze had broken out at 403 Ashtabula St. The single-story wood structure with a brick veneer exterior is owned by Mike Malone and rented by Breanna and George Massie.

When firefighters arrived, smoke and fire had already broken through the front of the house.

“It had vented through the front window,” Ironton Fire Chief Tom Runyon said.

The house was unoccupied except for two pet dogs, one of which — a bassett hound — was rescued by a passerby.

“Someone had made entrance and got one dog out,” Runyon said. “The smoke alarm was sounding so they did have a working smoke alarm.”

The fire started in a front room that was being used as a bedroom.

“It burnt the door out and rolled over to the living room, causing fire damage (there),” Runyon said. “It was a total loss of the bedroom area. There was no major structural damage.”

There was smoke damage throughout and a small amount of damage to the roof overhang.

Runyon declined to cite the cause of the fire.

“We are not seeing anything suspicious in nature,” he said.