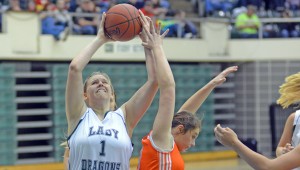 Not a bad starting five.

Stapleton — a 6-foot-4 junior center — was not only named first team All-Ohio but shared the year’s Player of the Year honor along with Hannah Plybon of Orrville and Marley Hill of Columbus Africentric.

Also earning a state honor was Fairland’s Jon Buchanan who was selected Coach of the Year along with Mike Coreno of Beachwood and Brenda Friend of Collins Western Reserve.

Buchanan has guided the Lady Dragons to back-to-back unbeaten regular seasons. Fairland has been 20-0 each of the past two years, 23-1 overall and two district titles.

Stapleton — who has been the Southeast District Player of the Year the past two seasons — averaged 174 points and 11.8 rebounds per game along with 5.3 blocked shots.

Stapleton has given a verbal commitment to Minnesota.

Fulks — a 5-5 junior guard — provided the outside shooting Fairland needed to keep teams from smothering Stapleton. She averaged 12.4 points and 3.7 assists.

The 5-6 Adkins scored 15. 0 points a game and averaged 5.0 rebounds as she helped the Lady Hornets to a runner-up spot in the Ohio Valley Conference behind Fairland.

Adkins enjoyed a milestone this past season when she eclipsed the 1,000-career point total.

Schweickart, Fulks and Adkins was all second team all-district.

Jim Walker jim.walker@irontontribune.com   Hannah Miller had an impressive season. The post-season has been pretty good, too. The St. Joseph... read more