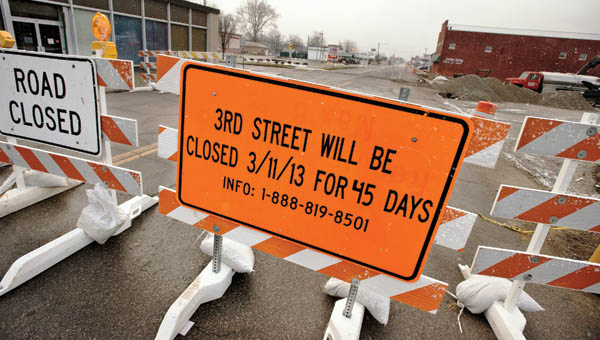 Ohio Department of Transportation has closed off part of Third Street, between Adams and Madison streets, because of construction of Ironton-Russell Bridge. Traffic will be detoured around this section of Third Street for 45 days.

For the next month and a half motorists going through downtown Ironton will have to follow the detour signs to get from here to there.

That’s because of temporary closures on Third and Jefferson streets required to allow crews working on the construction of the Ironton-Russell Bridge to install new water and sewer lines in that area.

“We are setting piers in that area and it is hard to build approaches and not affect what is below the surface,” said Kathleen Fuller, spokesperson for Ohio Department of Transportation District 9. “We are doing the best we can to accommodate the business and pedestrian traffic.”

On Monday Third Street, between Adams and Madison streets, and Jefferson Street, between Second Street and Campbell Avenue, were closed to road traffic for the next 45 days.

“We are trying to provide some access from the Second Street corridor,” Fuller said.

Construction of the $81.2 million bridge began a year ago with crews from Brayman Construction of Saxonburg, Pa. The two-lane cable-stayed bridge is slated to open in the fall of 2015.

During most of the closure period pedestrians will be able to use the sidewalks through the affected area. However at one point even that will be closed as new sidewalks are put in place. Motorists can gain limited access to the area through a parking lot off Second and Jefferson streets.

“It is not a through access, but you can come in and drop someone off and turn around,” Fuller said. “It has been part of the project plan. It is necessary. We don’t like to affect businesses in an adverse fashion. But you will have upgrades to the sewer system and sidewalks and the backdrop of a nice bridge.”

“We have taken over 93 to the new bridge,” Fuller said. “Truck traffic will be able to use it. We are widening that intersection at Jefferson that will be the ramp.”

Overall construction of the bridge continues to be on target despite occasional minor delays.

“We had a very good year in 2012 with a little more than 20 percent done which is where the contractors outlined it,” Fuller said.