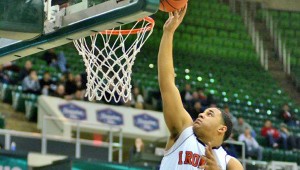 Which team asserts its will could be the key as the Ironton Fighting Tigers play the Oak Hill Oaks at 7 p.m. Saturday in the regional championship game.

Ironton (22-2) likes to play up tempo and can rack up points in big chunks. Oak Hill prefers a low-scoring game, relying on their defense and executing a patient offense.

On the season, Oak Hill (22-4) has allowed only 60 or more points on four different occasions.

“When you get to the regional finals, everybody’s playing at their best. You’ve got two great teams battling it out,” said LaFon.

“We’ll have to make sure our prep work is right as coaches and that our kids are relaxed and play, have confidence that they can accomplish the different roles that they have to play during a ball game.”

Carter is averaging 24.1 points a game and Fletcher 20.5 per contest. Trevor White is third on the team at 10 points a game.

The other two starters are 6-4 Aaron Stephens and 5-11 guard Josh Glover.

Ironton will have the size advantage. Fletcher stands 6-6 and White and Stephens 6-4.

Hammond — the team’s tallest player — leads the Oaks with 15 points and 7.5 rebounds per game. Haislop averages 14 points a game and Stiltner 13.

The two teams know each other well. Although the programs have met only twice, it has been the past two seasons in the sectional tournament. Ironton won 68-58 last year and 46-34 in 2011.

LaFon — in his eighth season at Ironton and 20th overall as a head coach — played for Persin at Chesapeake and spent his first six seasons as the Lady Panthers’ head coach and a boys’ assistant.

Persin is fifth all-time on the Ohio win list with 644. His teams at Chesapeake and Oak Hill have won 15 sectional titles and he guided Oak Hill to the Division IV state title in 2009.

The winner will advance to the state tournament to play at 10:45 a.m. on Thursday at the Schottenstein Center on the campus of Ohio State University.

Presale tickets for the Ironton Fighting Tigers Division III regional championship game will be on sale until 2 p.m. Friday in the auto shop office at Ironton High School and during business hours until 1 p.m. on Saturday at Iron City Hardware.

Tickets are $6 in advance but $8 at the door. Ironton receivers only 15 percent of the presale. Fans are encouraged to buy in advance to help the school.

Ironton plays Oak Hill at 7 p.m. Saturday at Ohio University. The winner advances to the state tournament to play at 10:45 a.m. on Thursday.

The Ironton High School student fan section has been vocal in its support of the Fighting Tigers’ run through the... read more