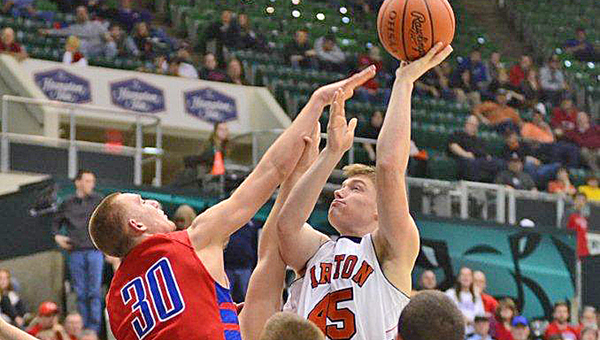 Half of the Jerome Schottenstein basketball court is 50-feet wide by 47-feet long. The Ironton Fighting Tigers will be concerned with every inch.

Ironton head coach Mark LaFon said his team must defend every square inch when they play the Ottawa-Glandorf Titans at 10:45 a.m. Thursday in the Division III state semifinals.

“They are skilled and handle the ball well. Everyone of them shoots the ball well and they can hurt you inside.,” said LaFon.

“You’ve got to guard the (3-point) line and guard the paint. We have to defend it. You can’t be late on anything. In tournament play it comes down to defending.”

Ironton (23-2) will take a 17-game winning streak into the Final Four against the Titans (24-3) who are making their second straight trip to the state tournament with all five starters returning.

Siefker has a 6.0 scoring average and Kaufman 4.6 average.

“They are very long and even their bench has some length. They have five players who are 6-4 to 6-6 in length. (Bramlage) posts up well,” said LaFon. “Obviously, rebounding is the key. We have to block out and keep them away from the glass.”

Ironton counters with the tandem of 5-9 senior guard Zac Carter and 6-6 senior forward Trey Fletcher. Carter has the top scoring average of any player in the state tournament with 23.9 points a game. Fletcher is close behind with a 20.4 average.

The Titans lost 74-66 to Portsmouth in the state semifinals last year. They were the Division II state champions in 2004.

Ironton finished runners-up in 2005 in a near-upset of heavily favored North College Hill led by O.J. Mayo and Bill Walker, both currently playing in the NBA.

Tickets for the state semifinal game are on sale in the Ironton High School auto shop office until 3 p.m. and from 4-6 p.m. at the Conley Sports Center Tuesday evening.

In the other semifinal game, the Versailles Tigers (22-5) and Leavittsburg LaBrae Vikings (24-3) meet in a battle of unranked teams.

Versailles is led by 6-5 sophomore guard Kyle Ahrens with 20 points a game. Also in double figures are 6-4 senior guard Chad Winner at 15.0 and 6-3 junior forward Damien Richard with an 11.0 average.

Versailles has one previous state tournament appearance in 2004.

LaBrae — making its first trip to the Final Four — is led by 6-7 junior forward Peyton Aldridge with a 20.4 average.

The only other player in double figures is 5-10 senior guard Carl Brown at 10.5 point a game.

Jim Walker jim.walker@irontontribune.com   Evan Maddox and Cody Midkiff were keys all season to the success of the Fairland Dragons.... read more