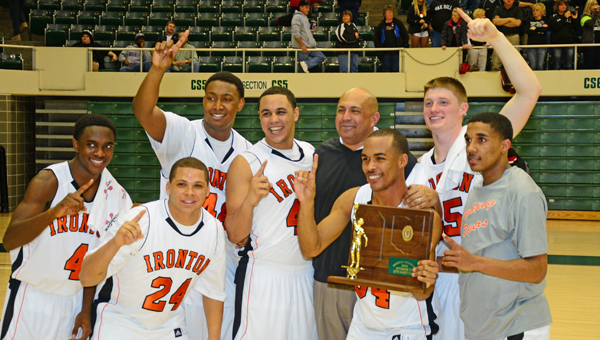 When Trevor White was in grade school, he remembers playing basketball against friends Zac Carter and Trey Fletcher.

Now that they are all seniors for the Ironton Fighting Tigers, White has earned All-Ohio honors in football while Carter and Fletcher were All-Ohio in basketball.

White recalls those early years and how their roles have changed.

“Back in the day, me and Zac and Trey used to play together and I used to beat them. Now they’ve exceeded to another level and I was still on this level trying to do my football thing,” said White.

By accepting his role, the 6-foot-4 White exemplifies the attitude of the seven seniors who have helped Ironton reach the Division III state tournament.

The trio along with seniors Aaron Stephens, Josh Glover, Darrius Boykin and Jalen Schweickart as well as the contributions of sophomores Tristan Cox and Joe Bowling and freshman Jake Long, Ironton (23-2) will take a 17-game winning streak into the Final Four against the Ottawa-Glandorf Titans (24-3) Thursday morning.

White said teamwork and accepting their roles has been the key to the team’s success and reaching their goal of making the state tournament.

“We’ve been working every since sixth, seventh grade. We’ve talked about it. We played AAU, we’ve played at 10 o’clock in the morning,” said White. “It’s a relief off my chest and off their chests. We want to give something back to our community and Ironton High School that’s no one has ever done.”

Stephens, a 6-4 center, was a first team All-Ohio selection in football headed to Ohio Dominican. Like many football players in the past, Stephens fills a certain role at center as a defender and rebounder.

Stephens can be likened to the third Dirty Harry movie installment “The Enforcer,” and “Dirty Aaron” relishes the role.

“My role for this team is I rebound and I’m a physical presence I guess you could say. I enjoy that,” said Stephens. “It’s probably my favorite role. I enjoy being the enforcer. It’s just fun.

Stephens moved to Ironton from Cincinnati prior to his junior year. His mother, the former Tammy Rowe, is an Ironton graduate. He said the seniors made him feel welcome.

“It’s really been great. They accepted me right off the bat because proved that I work hard. Some of them took me under their wing and showed me the ropes. We’re really close now. We still tease each other. I fit in great, I guess,” said Stephens.

I know basketball is not my first sport, I know I’m not the greatest, but I do what I can to contribute and do it to my best.”

The 5-10 Glover can score at times and has played some point guard in the past. However, he said his role became more defined by his junior year.

“I was getting good at defense and coach was needing me to play defense and make everybody better and I accepted it. I’ve just kept getting better and better,” said Glover.

“The other team is not expecting me to score so they don’t worry about guarding me and I get the open shot. I accept my role playing defense and get my shots when they come.”

Glover said making the state tournament has been a long-time goal, and winning a championship would not only be a great team accomplishment but a special gift for coach Lafon and the Ironton fans.

“We’re doing this for coach. He’s been with us longer than we have (been together). And we’re doing it for the city. They’ve been talking about this since our eighth grade year,” said Glover.

Boykin is usually asked to play defense, but he is capable of hitting the 3-pointer.

“Coach just tells us to do our job. It’s a blessing being on this team. I do my job playing defense and running the floor,” said Boykin. “Coach tells me if I’m wide open, shoot it, but not too early. I can knock it down.”

Boykin said being a part of the team and contributing in any way he can is all that matters.

Schweickart often plays the 3-point shooter of an opponent in practice. He said not being in the spotlight doesn’t matter, only winning.

“It’s good to play against them in practice. I just get them hyped and get them ready for the game,” said Schweickart. “It’s great we’re going to the Final Four. We’ve played together since grade school. I don’t really care (if I play), I just want to win it.”

White agreed that the team — especially the seniors — have been like a family.

“They’re a fun group to be around. We always laugh. Even when Stephens came in he fit right into our group. I love him with all my heart. I wouldn’t want to be with any other team besides these guys,” said White.

Jim Walker jim.walker@irontontribune.com   The experiment may be ending earlier than expected, and not by the coaches or management. The... read more