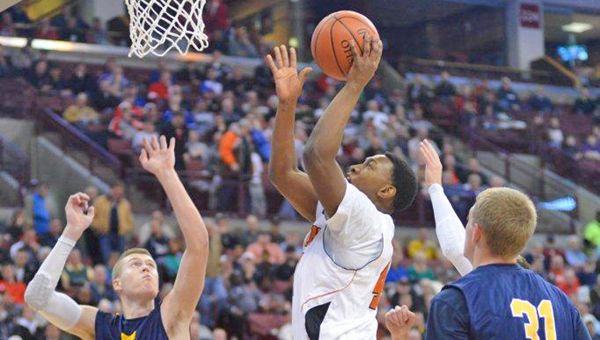 Ironton Fighting Tigers’ senior forward Trey Fletcher scores two of his game-high 27 points, but it wasn’t enough as Ironton lost a 61-60 in overtime to Ottawa-Glandorf on Thursday in the Division III state semifinals at the Jerome Schottenstein Center in Columbus. (Kent Sanborn of Southern Ohio Sports Photos.com)

COLUMBUS — There are so many key plays at the end of a one-point game, and even more in an overtime contest.

But the Ironton and Ottawa-Glandorf Division III state semifinal game Thursday at the Jerome Schottenstein Center might have had its biggest turning point in the second quarter.

With the 6-foot-4 senior’s presence absent from the lineup, the Titans were able to mount a comeback and tie the game. Eventually, White fouled out in regulation and O-G was able escape with a 61-60 overtime win on a foul shot by T.J. Metzger with 1.1 second left before a crowd of 10,742.

“It hurt us. It hurt our rhythm because it definitely changed the game for us,” said Ironton coach Mark LaFon.

“(White) being in foul trouble changes our defensive look from being big and long ourselves to being guard oriented and always having that one matchup where a guard is guarding a bigger, forward-type player and that’s when their offense got rolling. Every time (White) was on the bench, they started scoring a little bit.”

There were two other pivotal moments as well.

Metzger missed a 3-point attempt and Ironton got the rebound. Zac Carter broke across halfcourt hoping for an easy layup but the pass was on a line drive and Caleb Siefker intercepted for the Titans.

Siefker attempted a 3-point goal that missed, but White was whistled for his fifth foul and Siefker made all three free throw attempts with 41 seconds left to cut the deficit to 54-51.

Ironton turned the ball over once again on the inbounds play and Siefker made a layup with 35 seconds on the clock and it was 54-53.

“We just didn’t handle the ball. That’s the bottom line. I don’t know how to describe it. It was just not handling the ball and not wanting to step toward the ball,” said LaFon.

“Obviously, fouling that kid on the 3-point shot and stopping the clock (hurt). I don’t know which one is worse, the 3-point shot or stopping the clock. But the kids got through it. We got to overtime and the kids battled there as well. Overtime is one or two possessions even though its four minutes. The kids played with a lot of heart and passion. We just came up short. They made plays and we didn’t.”

Trey Fletcher hit the first of two foul shots for Ironton with 27 seconds to go in regulation to give the Fighting Tigers their last lead at 55-53.

O-G played for the tying shot and Matt Kaufman drove the lane for an easy layup to tie the score with one second on the clock.

“We had a play set up, but they picked up the pressure and forced us outside,” said Kaufman. “When I got the ball, I looked for an opening and there was no one in the paint. I was surprised.”

LaFon said Ironton was concerned with the Titans’ 3-point shooting and put extra pressure on their shooters.

“If you haven’t seen them play, they can light it up in bunches and they like to take those shots,” said LaFon

“We wanted to make sure you’re not just going to walk out there and take our chances with something you do very well. We were there and had them covered. We just made a mistake on one assignment.”

Carter drained a trifecta at the 2:21 mark to tie the game but Metzger made two free throws at the 1:41 mark and the Titans were up 60-58.

Carter was fouled on a drive with 35 seconds left and hit both attempts to tie the game again. O-G then ran the clock looking for the final shot.

Metzger then drove the lane with time running out and was fouled with 1.1 second on the clock. He missed the first attempt but made the second and it was 61-60.

Ironton’s long inbounds pass went out of bounds on the other end and O-G threw the ball inbounds as time expired.

“I took it down the lane and saw a guy and tried to make a move and tried to throw my body into that guy. I tried to get the ‘and one.’ There was no doubt I wasn’t going to pass it,” said Metzger.

“We want to play defense the way we played all year. We felt we could get someone on offense to make a mistake. We felt like we had that,” said LaFon.

“But sometimes things just don’t roll the way you need them to and then they just make a play. We’re trying to be aggressive and trying to force something and they just turn the corner and make a play.”

“I got in a good rhythm at the beginning of the game and they started pressuring me more, and once they picked up the pressure, Trevor was in foul trouble and we needed some guys to step up and they did. We just didn’t get the job done today,” said Fletcher.

Ironton tied the game at 28 when Tristan Cox drained a trey with 1:09 left in the half.

The Fighting Tigers had the lead twice in the third quarter at 36-35 and 38-37 before the Titans used four points by Jacob Leopold to lead 41-38 at the end of the quarter.

Fletcher led Ironton with a game-high 27 points and also grabbed 13 rebounds. White scored 14 points and Carter — playing with a bad leg bruise that kept him out of practice all week — finished with 12 points.

“They’re long and it’s hard to get around them, even when you pull up for a jump shot. They’re long and every shot is contested. They did a good job of helping out and then getting back to their man. They all played great defense,” said Carter.

Titans’ coach Tyson McGlaughlin said Carter was the focus of the game plan all week in practice.

“Our whole game plan was Carter’s not going to beat us,” said McGlaughlin. “Every coach I talked to about Ironton said Carter would be the best player we faced all year. If Carter got 25 tonight, we’re just watching the rest of the weekend.”

LaFon praised Carter for playing through the injury he sustained taking his first field goal attempt in the regional finals.

“To his credit, (Zac) never complained about it. He didn’t show it on the court. To come out and play as hard as he played without practicing since Saturday,” said LaFon. “Trey picked up the slack and that’s the way it’s been all year long. If one can’t do it, the other one does.”

Ironton had a season-high 21 turnovers and they led to 24 points for the Titans.

Metzger finished with 25 points — 17 in the first half — and Kaufman scored 11 for the Titans who will play Versailles at 10:30 a.m. Saturday in the state championship game.

Versailles used a 13-0 run in the fourth quarter to beat Leavittsburg LaBrae 64-52 in the other semifinal game.

Cueto gets knocked around in 10-9 loss