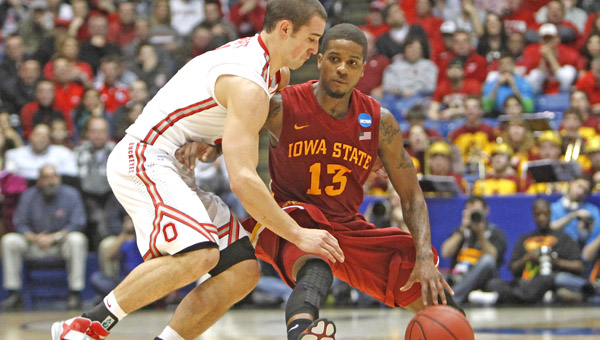 DAYTON (AP) — Aaron Craft dribbled in place at the top of the arc, watching to see if any of his Ohio State teammates were getting open near the basket for a game-winning shot.

The point guard had a clear look at the clock as it raced toward zero atop the backboard. He realized what he had to do — take a little Ohio State tournament history into his hands.

Craft held the ball until he had no other choice, then swished a 3-pointer with a half-second left Sunday for a 78-75 victory over Iowa State, sending the Buckeyes to a school-record fourth straight trip to the round of 16.

No. 2 Ohio State had managed to escape as the lone high seed left in the NCAA tournament’s most-busted bracket.

“The moment’s a lot bigger than me,” said Craft, who had allowed Iowa State to catch up with missed free throws and an errant jumper. “It just happened to be in my hands at the end.”

Ohio State (28-7) needed Craft’s fearless shot — over 6-foot-7 defender Georges Niang — to avoid yet another upset in the oh-so-wild West Regional. Four of the top five seeds fell fast and hard in the first weekend.

The Buckeyes’ 10th straight win sent them to Los Angeles for a game on Thursday against sixth-seeded Arizona.

Tenth-seeded Iowa State (23-12) overcame a late 13-point deficit by hitting 3s — the Cyclones’ specialty — but wound up beaten by one, a tough way to have their upset bid end.

“We played our hearts out,” said Will Clyburn, who scored 17 points. “It was a tough game and he made a tough shot. He made a great play.”

Craft’s missed free throws helped Iowa State catch up. He missed the front end of a pair of one-and-one chances and was off on a jumper from just inside the arc with 29.2 seconds left and the score tied.

The Cyclones knocked the ball out of bounds while trying for the rebound, setting up the final chance. Coach Thad Matta called a timeout and went over the options.

When the Cyclones switched coverages to take away leading scorer Deshaun Thomas and put their tall freshman on Craft, the point guard decided to take it himself.

The officials reviewed the play to confirm that Craft’s foot was behind the arc when he shot. Lucious didn’t come close on a long heave as the final half-second ran off.

Lucious stood on the court after the buzzer sounded, stung by the final half-second. Coach Fred Hoiberg was unable to make an opening comment during the postgame news conference, the pain etched all over his face.

Thomas led Ohio State with 22 points, and Craft had 18. LaQuinton Ross scored 10 straight for the Buckeyes as they built that second-half lead.

The Buckeyes escaped Dayton — the scene of a couple of a couple recent NCAA tournament disappointments — as the lone high seed left in the West.

No. 3 New Mexico, No. 4 Kansas State and No. 5 Wisconsin were knocked out right away, losing their openers. No. 1 Gonzaga joined them Saturday night, shocked by ninth-seeded Wichita State 76-76.

The Buckeyes had opened the tournament in Dayton twice previously under Matta and lost despite thousands of fans providing a home-court feeling.

Perhaps it was fitting that this one was decided by a 3.

The Cyclones lead the nation in 3-pointers, with nearly 44 percent of their attempts coming from behind the arc. Defense has been Ohio State’s foundation during its late winning streak, which included the Big Ten tournament title.

With Craft anchoring Ohio State’s perimeter defense, the Cyclones had trouble getting open shots and missed eight of their first 12 from behind the arc. They finished 12 of 25 on 3-pointers.

The Cyclones also lost one of their best perimeter defenders and their second-best 3-point shooter late in the first half. Guard Chris Babb got treatment on his left leg in the final minute of the half and went to the locker room early. Babb sat on the bench for the rest of the game.

The Buckeyes pushed the lead to six points at the start of the second half, but Melvin Ejim’s putback cut it to 52-51. He and Craft bumped into each other and traded words heading into a timeout with 11:43 left.

Neither side was budging.

Coming out of the timeout, the Buckeyes put together their best run of the game. Ross hit a pair of 3s, a layup off a steal and two free throws for a 65-53 lead with 8:18 to go.

The Cyclones turned to the 3 — both versions — to pull even. Lucious’ three-point play tied it 69-all with 3:53 left, completing a 13-0 run. Craft missed the front end of a pair of one-and-one chances during that spurt.

Craft tried not to think about his previous misses as he watched the white numbers on the clock tick down and squared up to decide the game.

“If I miss, we still have overtime,” he said. “So it’s not as big of a pressure situation.”