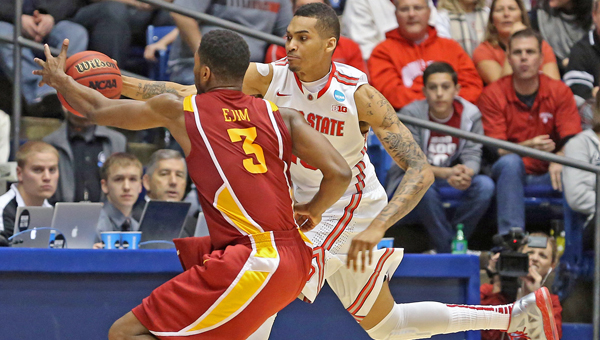 Ohio State Buckeyes forward LaQuinton Ross (10) saves a ball from going out against Iowa State Cyclones forward Melvin Ejim (3) during the second half of a third-round game in the NCAA Tournament at Dayton Arena in Dayton on Sunday. Ohio State defeated Iowa State, 78-75. (MCT Direct Photo)

EAST LANSING, Mich. (AP) — The Big Ten has a nation-high four teams still in the NCAA tournament, bolstering its season-long boast that its conference is the best in college basketball.

The Big Ten has combined to win 10 games so far, its best showing through the round of 32 — ever.

And, it could get even better.

“The fact that there are four teams advancing shows that this conference prepares you for any type of team or game,” Hoosiers coach Tom Crean wrote in a text message Monday morning while preparing to play fourth-seeded Syracuse in the East Regional semifinals. “You develop possession by possession appreciation.”

Indiana played grind-it-out, low-scoring games during the Big Ten — going 0-3 when held to fewer than 60 points — and had to rally late in some other games to win. The experiences paid off when the Hoosiers, who won the Big Ten regular season title, needed to close with a 10-0 run to beat ninth-seeded Temple 58-52 and get to the regional semifinals for the second straight year.

Being in closely contested games also seemed to help the Big Ten tournament champion Buckeyes, who advanced to a school-record fourth consecutive round of 16 by making enough stops and shots to outlast 10th-seeded Iowa State 78-75.

“Playing 21 straight Big Ten games with the caliber of players, teams and coaches that we have in the conference does prepare you for anything,” Ohio State coach Thad Matta said in a telephone interview with The Associated Press. “You face so many different styles from how teams defend ball screens to how they run their offenses.

“I’m happy as heck for the conference, but we’re just trying to figure out how to get past Arizona.”

Ohio State will face the sixth-seeded Wildcats in the West Regional semifinals.

Michigan State will be matched up with second-seeded Duke in the Midwest, a highly anticipated game featuring coaches who have combined to appear in 25 regional semifinals since 1998.

Michigan, which has won two NCAA tournament games for the first time since 1994, will have to get past top-seeded Kansas in the South.

The Big Ten had seven teams start the NCAA tournament last week and only fifth-seeded Wisconsin failed to advance, losing by 11 points to 12th-seeded Mississippi.

Minnesota routed UCLA by 20 — though that didn’t help Tubby Smith keep his job because he was fired Monday, a day after losing by 14 to Florida.

The Golden Gophers and Fighting Illini helped to help the conference win 10 games, a total that trails the Big East’s record of 11 wins through the round of 32 in 2009 and 2012, according to STATS. The Big Ten had won nine games four times up to this point of the NCAA tournament, including last season, when it also sent four teams to the regional semifinals.

Spartans coach Tom Izzo started saying the conference was the best in the country before the season opened and he felt even stronger about his opinion throughout the nonconference schedule when his team had one of the league’s marquee wins by beating Kansas.

Even though the Big Ten has one more team than the Big East still in the NCAA tournament — and twice as many as the ACC and Pac-12 — Izzo insisted he doesn’t feel as if his point has been proven.

“To some, it won’t be validated unless the Big Ten wins a championship,” Izzo said. “Perception becomes a little bit of reality and the more games you win, the farther you go. I think we earned our keep, again, over the 18 grueling games and that Big Ten Tournament.

“Now this is frosting on the cake. “

Michigan State and Michigan won their first two games relatively easily, putting the rivals in the same round of 16 for the first time.

Izzo, who has said it is “illegal” to like the Wolverines, acknowledged he is pulling for the maize and blue and the rest of the Big Ten during the NCAA tournament

Michigan coach John Beilein said he surprised himself by cheering for another rival, the Buckeyes, in their tight game with the Cyclones.

“During the season, I do not root for other schools in the Big Ten,” Beilein told The AP. “But I found myself rooting for the Big Ten this past weekend, hoping Aaron Craft would make a free throw or a 3-pointer, because there’s an appreciation for the competition we have within our conference.”

The Big Ten hasn’t had a national champion in men’s basketball since the Spartans won it all in 2000, a title that ended an 11-year drought after Michigan cut down the nets in 1989. Before that, the Bobby Knight-led Hoosiers won national titles in 1987, 1981 and 1976 and Magic Johnson helped Michigan State beat Indiana State — with Larry Bird — in 1979 in a transcendent game.

Matta said the Big Ten is due for a title, telling reporters in Dayton, Ohio, it is “highly likely,” a team from the conference will win the national championship.

“It will be interesting to see how it plays out.”