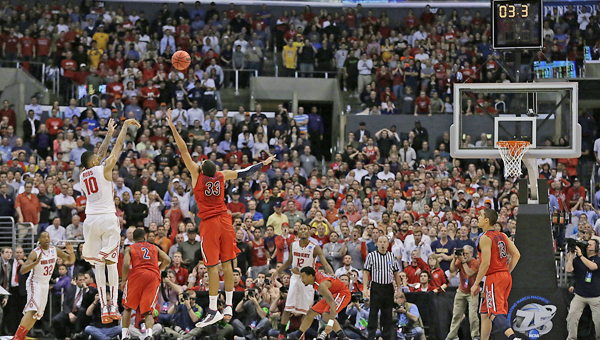 Ohio State’s LaQuinton Ross (10) hits the game-winning 3-pointer in the waning seconds of a 73-70 triumph against Arizona in the NCAA Tournament Sweet 16 game at Staples Center in Los Angeles on Thursday. (MCT Direct Photo)

LOS ANGELES (AP) — Ohio State needed another last-second shot, and Aaron Craft had the ball at the top of the key again.

But last week’s hero gave it up to the hottest hand on the floor, and LaQuinton Ross sent the Buckeyes to the brink of their second straight Final Four.

Ross hit the tiebreaking 3-pointer with 2 seconds to play, and Ohio State advanced to the West Regional final with a 73-70 victory over Arizona on Thursday night.

Ross, Ohio State’s remarkable reserve, scored 14 of his 17 points in the second half for the second-seeded Buckeyes (29-7), who rallied from an early 11-point deficit. With Ross making a series of tough shots capped by that dramatic 3, Ohio State weathered the sixth-seeded Wildcats’ late charge for its 11th consecutive victory since mid-February.

“It feels great, man,” said Ross, a once-ballyhooed recruit who has grown into a bigger role in the past two months. “I think this is what every player grows up looking at on TV, wanting to hit that big shot for an NCAA tournament team. It just feels great right now.”

Deshaun Thomas scored 20 points for Ohio State, and Craft added 13 before ceding Ohio State’s final shot to Ross when the Wildcats didn’t make the proper switch on the Buckeyes’ screen. Ross coolly drilled his second 3-pointer and set off a wild celebration in the Ohio State section of the Arizona-dominated crowd.

Craft hit an awfully similar 3-pointer against Iowa State last Sunday to send the Buckeyes forward with a 78-75 victory, but Ross didn’t flinch at his turn under pressure in this increasingly magical Ohio State season.

“LaQuinton has really grown in a lot of areas,” Ohio State coach Thad Matta said. “I think the biggest thing he’s done is he’s engaged himself in all the little things, and that’s made him a better basketball player. We’re proud of him.”

Arizona couldn’t get off a shot on its last-second inbounds heave, and Mark Lyons greeted Ross in the postgame handshakes with a joking “I can’t stand you!”

Lyons’ acrobatic three-point play for the Wildcats (27-8) had tied it with 21.8 seconds left, thanks to a foul by Ross. But Ross knew he might be in for a special moment when he was assigned Kobe Bryant’s stall in the Lakers’ locker room at Staples Center — and he nailed a shot that would have made the NBA star proud.

“It was similar to the play we ran last game,” Ross said. “We like to get the (big men) on a pick-and-roll. It so happened they messed up the switch there, and I was able to knock down the shot.”

On Saturday, Ohio State will face the winner of the late game between underdogs Wichita State and La Salle. As the only top-eight seed left in the West, the Buckeyes will be Atlanta-bound with one more win.

Sam Thompson added 11 points for the Buckeyes, who trailed for nearly the entire first half before pushing ahead and nursing a small lead throughout the final minutes.

Lyons scored 23 points including his gutsy three-point play for the Wildcats, who rallied from a 10-point deficit in the second half before falling just short of their second NCAA regional final in four years. Solomon Hill added 16 points in his native Los Angeles, but the rest of Arizona combined for just 31 points on 10-for-29 shooting.

“I tried to force the issue too much to get back on the hot start,” Lyons said.

After Arizona jumped out to that early 11-point lead, Ohio State gathered its game and mounted a 33-13 surge spanning halftime, taking a 53-43 lead with 11 minutes left. The Wildcats finally answered, but Ross kept the Buckeyes in front with nine consecutive points down the stretch.

Although Arizona coach Sean Miller lamented his team’s coverage mistake on the final possession, he still praised his players.

“I’m proud of our guys’ effort,” Miller said. “We tried hard, and losing in this tournament when you play hard to the end hurts more in the beginning, but I think you leave with a lot of pride knowing you played your heart out.”

The game was the second NCAA tournament meeting between Matta and Miller, whose friendship goes back two decades to their time together at Miami of Ohio and Xavier.

Ohio State hasn’t lost since Feb. 17, beating Indiana on the road before winning the Big Ten tournament. The Buckeyes had much more trouble than Arizona in their first two NCAA games, but they’re showing a knack for last-minute heroics at the perfect time.

Arizona took the lead on its first basket, a 3-pointer from Lyons in the opening minute, and held it throughout a slow-moving first half featuring 19 fouls. With superior ball movement and scoring balance, the Wildcats eventually pushed the margin to 31-20 on Nick Johnson’s 3-pointer with 7 minutes left in the half.

Ohio State finally awoke when Craft returned to the game after sitting early with two fouls, trimming the margin to 38-34 by halftime. The Buckeyes finished the half on a 14-7 run capped by the second 3-pointer from Thomas, who scored 16 of their 34 first-half points with his steady all-around game.

Thompson’s layup with 17:39 left gave Ohio State its first lead since 2-0, and the Buckeyes opened the second half with a 10-0 run while holding Arizona scoreless for more than 6 1/2 minutes spanning halftime.

As the only school west of Wichita left in the regional, Arizona had a significant home-crowd advantage at the cavernous Staples Center, packing the lower bowl with thousands of fans. But Ohio State also had a healthy fan turnout led by Cleveland’s favorite son, “The Price Is Right” host Drew Carey.

Votto OK after collision with Royals 1B