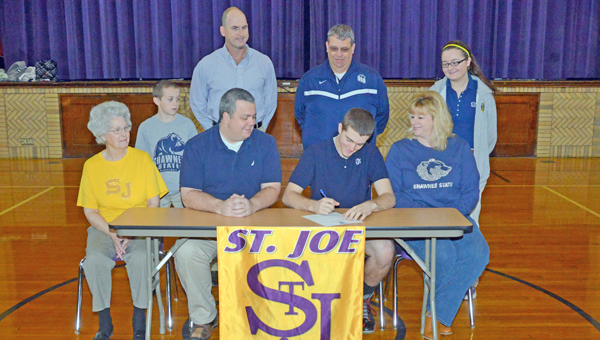 Justin Mahlmeister had a goal to play at the collegiate level, and as a three-sport standout he had several choices to achieve that goal.

With offers in basketball, baseball and soccer, Mahlmeister took the latter as he signed to play goalkeeper for the Shawnee State Golden Bears.

“Soccer-wise, I felt I could contribute a lot better considering my size. I could play goalie and cover the goal a lot better than playing forward or going to point guard in basketball,” said Mahlmeister.

Mahlmeister was a second team All-Ohio selection but picked Shawnee State because it offered nursing and was close to home.

“Playing at Shawnee it’s close to home and easy for people to come watch. Shawnee State has always been that one college that’s real close and you always look up to the close colleges you can play for,” said Mahlmeister.

Oddly, Mahlmeister’s first love is basketball. He didn’t start playing soccer until he arrived at St. Joseph in junior high.

“To be honest, at first when I came here in the eighth grade, I wasn’t a big fan of it. Once I played it for five years, I liked it a lot better than I did when I first came here,” said Mahlmeister.

“Basketball I’ve played my whole life. I’ve played it ever since I was in the third grade, so I guess soccer is a lot fresher to me than basketball and baseball.”

With his signing, Shawnee State now has three roster goalies including another freshman recruit. Mahlmeister said he isn’t sure what kind of playing timetable awaits.

“It’s a whole new level. Guys are faster, stronger, be able to kick a lot harder, place it a lot better. It’ll just take a lot of visual and memorization of how to play the sport a little bit better.”

However, Shawnee State head coach Ron Goodson wants Mahlmeister in the team’s plans as soon as he sets foot on the field,

“We are expecting big things out of Justin. He is a tremendous athlete and goalkeeper. We look for him to make an impact on our program and have as stellar a college career as he has had in high school,” said Goodson.

“He has great size and is a hard worker. We are thrilled to be able to sign such a talented local player.”

Regardless of when Mahlmeister plays, St. Joseph coach Tim Hopkins said the Bears have added a quality individual.

“Justin has always been a gifted athlete. The exciting part of the past six years is watching his tactical skills catch up with his physical ability. More than that, he’s played every minutes with a high degree of character which has been a great role model for all the younger players behind him,” said Hopkins.

Justin is the son of Toni Neal and Jimmy Mahlmeister.

‘The Future is Now’ motto for Reds’ players, organization

I remember reading about the philosophy of a former NFL head coach named George Allen who was credited with saying,... read more