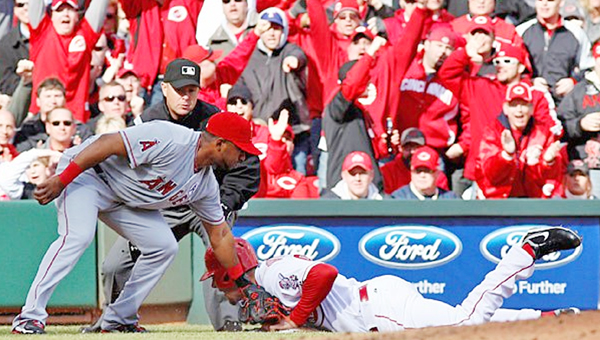 Cincinnati Reds’ outfielder Ryan Ludwick slides safely into third base but suffers a dislocated shoulder in the process. The Reds lost their Opening Day game 3-1 to the Los Angeles Angels in 13 innings. (Photo Courtesy of The Cincinnati Reds.com)

CINCINNATI (AP) — The defending NL Central champions are hoping that their extra-long opening day loss doesn’t affect their lineup well into the season.

Left fielder Ryan Ludwick dislocated his right shoulder during a 3-1, 13-inning loss to the Los Angeles Angels on Monday, giving them a big worry only one game into the season.

Ludwick’s hand stuck in the dirt on his headfirst slide into third base in the third inning, making his shoulder pop out of place. He left the game and will have an MRI on Tuesday to determine the significance of the injury.

“You hate to see a guy come off the field holding his arm,” manager Dusty Baker said. “It’s disheartening. We’ve done so well the last couple of years with injuries.”

The Reds won 97 games last season by avoiding significant injuries most of the way. First baseman Joey Votto tore knee cartilage and missed 48 games. Ludwick became their top run producer in his absence, and decided to stay in Cincinnati for two more years and $15 million.

Now, they’re going to have to fill in for him.

“The ground was a little wet, and when I hit the ground my hand stopped,” Ludwick said. “Normally, it slides with you. My shoulder popped out. This wasn’t the best opening day.”

The Reds felt the same way about the ending.

Chris Iannetta singled with the bases loaded in the 13th inning, deciding the first interleague opener in major league history. It was the second year in a row that a first game in Ohio wouldn’t end.

Last year, the Blue Jays beat the Indians 7-4 in 16 innings in Cleveland, the longest opener in major league history. This one was a fitting follow-up at the other end of the state. And Iannetta was in the middle of it.

He hit a solo homer in the third inning off Johnny Cueto, then grounded out and struck out three times, including with the bases loaded in the seventh inning to keep it tied at 1.

With that, the Reds were headed to a loss in their longest season opening game since 1975, when they beat the Dodgers 2-1 in 14 innings.

“That was a heck of an opening day game,” Hoover said. “It would have been better if we’d have come out on top.”

Mark Lowe pitched two innings for the win. Ernesto Frieri, the Angels’ seventh pitcher, completed an impressive showing by the Angels’ bullpen, which allowed only one hit over the final seven innings.

A team that sunk $125 million into acquiring outfielder Josh Hamilton to upgrade its offense pulled this one out with a bullpen that has a few questions to start the season. Angels pitchers fanned 13 in all, their highest total on opening day.

Shin-Soo Choo had a solid debut at the Reds’ leadoff hitter, reaching three times. He doubled in the third and came around on a ground out and Weaver’s wild pitch.

The bullpens decided an opener between two teams that think they can contend for the playoffs right from the first pitch — which was a 92 mph fastball by Cueto for a called strike.

The Angels’ biggest offseason move was signing Hamilton, who had a nostalgic start to the season. He started his comeback in Cincinnati on opening day 2007 after years of drug abuse.

He got a standing ovation that day before his pinch-hit appearance in 2007, a fly out. Hamilton got another loud ovation on Monday from fans who wished he’d stayed for more than a year. Cincinnati traded him to Texas after one season.

Hamilton was 0 for 4 with a pair of walks.

Nobody on the Reds looked forward to the opener more than Cueto, who strained muscles in his side on his eighth pitch in the playoff opener last year. He had to sit and watch as the Reds blew a two-game advantage and lost to the Giants in the first round, in part because his injury left the rotation in disarray.

Fully healed, the right-hander was back on his game. He gave up three hits and fanned nine, including Iannetta and pinch-hitter J.B. Shuck with the bases loaded in the seventh to keep it tied at 1.

NOTES: It was sunny and 47 degrees at the first pitch. The crowd of 43,168 was the largest at Great American Ball Park for a regular-season game. … Joe Torre, who managed the U.S. team in the World Baseball Classic, threw a ceremonial pitch to Reds 2B Brandon Phillips, who played on the team. … The 4-hour, 45-minute game was the longest opener in Angels history. … Cueto’s nine strikeouts were the most by a Reds pitcher on opening day since Mario Soto struck out 10 in 1982.