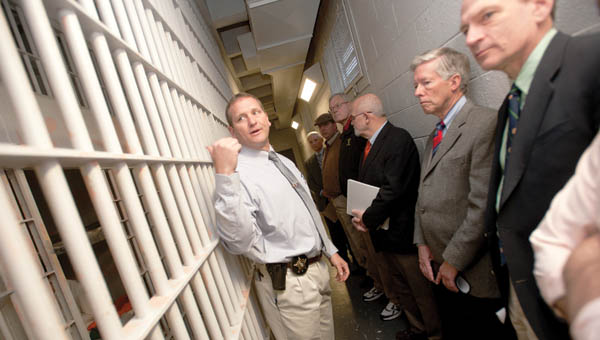 Investing in small projects to start bringing the Lawrence County Jail in compliance may be the next step for the county.

“I have to see something to be able to think about things,” Commissioner Bill Pratt said after the tour that included Commissioner Freddie Hayes, Common Pleas Judge Charles Cooper, Lawrence County Municipal Judge Donald Capper and members of the public.

“This was to see the kind of condition it is in,” Pratt, who is also committee chair, said. “Ultimately it is the up to the sheriff for what we should do.”

Earlier this year county officials met with state corrections officials about recommendations that were made following a state jail inspection that found the facility deficient on numerous counts.

Pratt suggested investing $50,000 into the jail by the county issuing a bond that would be purchased by the Neighborhood Investment Program of County Treasurer Stephen Burcham at 1 percent interest. With the county recently paying off its purchase of the former Campbell school, now headquarters for the department of job and family services, there are some additional funds available.

“We are at a time when we can do little things,” Pratt said.

Cooper commended the ad hoc committee and asked if it would be possible for a private company to get involved with running a jail.

“You are on the right track,” Cooper said. “Ohio has turned over penitentiaries to a private corporation. A private corporation can make money doing this. Have we considered the possibility that might work on the county level as well?”

Sheriff Jeff Lawless said there was a local group possibly interested in running the former Ohio River Valley Juvenile Facility, which was shut down by the state as a cost-cutting measure.

“I don’t know if that would fly,” Lawless said.

On Tuesday there were 68 prisoners at the jail that state standards say should only house 16 inmates. However because of the average census in the county far exceeds that figure, the state has suggested the county apply for a variance to enable it to house 58 prisoners, the same number as there are beds. Currently the census can run as high as 93 a day.

Pratt also suggested either taking over the Ironton City School administration building and remodeling it into a dorm-type facility to house some of the inmates or building a 36-bed facility for women and those who have committed misdemeanor crimes. Felons are supposed to be housed separately from misdemeanor inmates, but all are housed together at the current jail.

Pratt asked the sheriff to come up with a prioritized list of what he would like done at the jail.

“We didn’t create (the problem), but we are trying to fix it,” the commissioner said.

The committee will meet again at 10 a.m. May 7. Any member of the public is invited to attend the meeting.

The doctor whose clinic’s files were the subject of a recent search warrant has had his license suspended. On Monday... read more