Dragons down Hornets in OVC 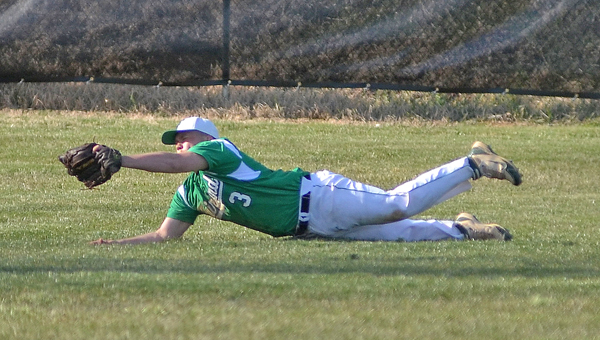 COAL GROVE — What a difference a day makes.

After committing seven errors on Tuesday, the Fairland Dragons had one error and some strong hitting and pitching as they beat the Coal Grove Hornets 8-3 Wednesday in an Ohio Valley Conference game.

“The top of their lineup hit the ball well,” said Hornets’ coach Dean Mader. “We hit the ball hard, we just can’t get anything to fall. They made some great plays defensively.”

Fairland (2-1, 2-0) got solid pitching from Matt Aliff who pitched a five-hitter, struck out seven and did not issue a walk.

Kyle Sowards and Aliff singled and Josh Ross hit into a fielder’s choice as Fairland took 1-0 lead in the first inning.

The Dragons erupted for five runs in the second inning.

Alex Thompson singled, moved up on a wild pitch and scored on a hit by Dylan Murphy. Phillips doubled home a run, Garrett Scheibelhood reached on an error as a run scored, Sowards singled in a run and Aliff was safe on an error as the final run came home.

Coal Grove (0-2, 0-2) got a run in the fourth on hits by Conor Markins and Jacob Pierce and an error.

Both teams scored two runs in the seventh.

Evan Russell walked, Murphy was safe on an error and Phillips had a two-run double in the top of the inning.

Jesse Rigsby doubled, Alex bare singled and Isaiah Gunther singled for a run in Coal Grove’s half of the inning. Gunther stole second and Bare scored on the throw to second base.

CINCINNATI (AP) — Joey Votto’s first hit of the season wasn’t all that pretty, but the timing and placement were... read more