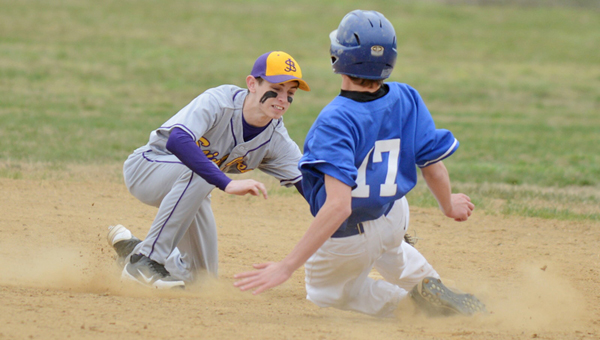 Much like the Rolling Stoners, St. Joseph Flyers’ coach Brent Wirzfeld can’t get no satisfaction.

Wirzfeld was not totally happy with the Flyers offensive output in a 16-5 win over the Sciotoville East Tartans on Thursday.

“We scored some runs, but we left too many runners on base. We did come up with some clutch hits,” said Flyers’ coach Brent Wirzfeld.

The Flyers (3-0) had eight hits with Eli Lewis going 2-3 with a home run and three runs batted in. Bryson Adkins was 2-4 and Trey Young added a double.

Justin Mahlmeister got the win in relief. In 3.2 innings of work, Mahlmeister struck out six, allowed only one hit and did not walk a batter.

Cole Willis went 2.1 innings in his varsity debut. He fanned five, walked one, gave up five hits and only three of the five runs he allowed were earned.

“(Cole) did a pretty good job for the first time he’s ever started a game. We only planned on him working three innings,” said Wirzfeld.

The Flyers scored a run in the first when Adkins walked with the bases loaded.

East tied the game in the top of the second but the Flyers answered with for runs in the bottom of the frame.

Young and Lewis walked and Hunter Pemberton and Joseph Payton were hit by pitches to force in a run. Mahlmeister was safe on an error for a run, Adkins singled in a run and Grant Geswein was hit by a pitch to score the final run.

The Tartans tied the game in the third but the Flyers took the lead for good with three runs in the fourth.

Adkins singled, Young doubled and a throwing error scored a run. Lewis walked and Pemberton was safe on an error as two more scored.

Six runs scored in the fifth inning on three walks, and error, a hit batsman, a passed ball and a two-run single by Mahlmeister.

Geswein walked to start the sixth and Lewis followed with his first career home run to end the game.