Nationals slip past Reds in 11 innings 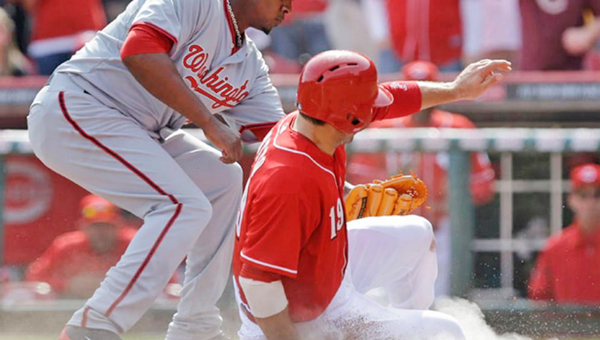 Cincinnati first baseman Joey Votto slides safely into home to score the tying run on a wild pitch in the ninth inning. The Reds tied the game at 5-5 but lost 7-6 in 11 innings to the Washington Nationals on Saturday. (Photo Courtesy of the Cincinnati Reds.com)

Cincinnati sent the game to extra innings with the help of Ian Desmond’s two errors, but the shortstop led off the 11th with his first homer of the season, leading the Washington Nationals to a 7-6 victory on Saturday.

It went down to the last strike.

Wilson Ramos also homered in the 11th off J.J. Hoover for a 7-5 advantage. Brandon Phillips doubled home a run with two outs in the bottom of the inning before Craig Stammen (1-0) fanned Jay Bruce to end it.

The Reds went 4 for 17 with runners in scoring position, stranding 11.

“We had a chance to win that game several times,” manager Dusty Baker said. “We’ve got to come up with the big hit. I guess turnabout’s fair play.”

Extra-inning games have been the norm between the NL’s top two teams from last season — Washington won a league-best 98 games, Cincinnati 97. They’ve gone to extra innings in five of their last 10 meetings.

The Reds have gone extra innings in two of their first five games this season. They played 13 innings on Monday before losing to the Los Angeles Angels 3-1, with Hoover giving up a pair of runs in the 13th.

“I’d rather get them out of the way now and move on to the rest of the season,” Hoover said.

Bryce Harper also homered for the Nationals, who were coming off a 15-0 loss in the series opener — their most lopsided defeat since baseball returned to Washington in 2005. The Reds hit six homers in that one, pounding a pitching staff that gave up only one run in its first three games.

Washington got the better of it this time, hitting five homers to Cincinnati’s one. The teams have combined for 12 homers, accounting for 20 of the 28 runs in the series.

Mistake pitches have landed in the seats. So have some good ones.

Desmond’s two errors led to a pair of runs that helped the Reds rally from a 5-1 deficit against one of the NL’s best bullpens, which has been hit hard in the first two games of the series.

Nationals closer Rafael Soriano blew a save for the first time in three chances. He gave up a leadoff homer to Shin-Soo Choo in the ninth before Joey Votto tripled — his first extra-base hit of the season — and scored on a wild pitch.

Harper connected on a two-run shot off Mike Leake in the third inning, his third homer of the season. Ramos added a two-run homer in the sixth, a pleasant moment in a ballpark where the catcher had his lowest point last season.

Ramos also homered at Great American last year, but later tore cartilage in his right knee while chasing a passed ball. He needed two operations to get the knee healed and missed the rest of the season.

Washington made three errors that kept the Reds in it.

Desmond’s throwing error set up Todd Frazier’s RBI double in the fourth. His fielding error let in another run in the eighth that trimmed it to 5-4. Desmond has four errors already after committing only 15 last season.

Frazier had three hits and drove in two of Cincinnati’s runs. He’s the only Reds player to hit safely in all five games.

Choo, obtained from Cleveland in the offseason to bat leadoff, had a homer and a single, and was hit by a pitch for the fourth time in five games. He has reached base safely in 13 of his 25 plate appearances.

NOTES: The Reds honored Johnson on the field before the game, presenting etched glassware among his gifts. Johnson, the NL Manager of the Year last season, led the Reds to the NL championship series in 1995. … Nationals 1B Adam LaRoche got a day off. He’s been bothered by a sore back and is 0 for 13, matching the worst start of his career. … Votto is 5 for 18 this season with four singles and one RBI.