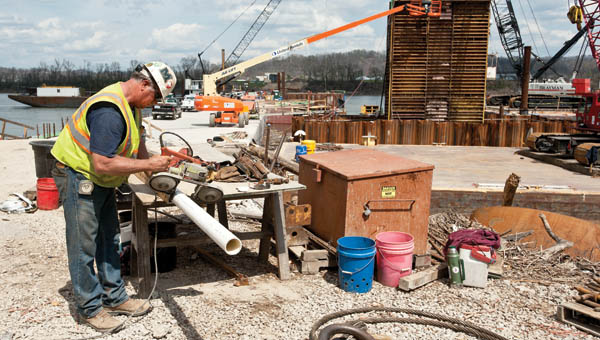 Crews were installing rebar into one of the piers on the Kentucky side of the new Ironton-Russell Bridge and extracting water from a coffer cell Wednesday, plugging along with the $81.2 million project that is nearly a quarter of the way complete.

And with the weather heating up, officials say pace on construction is expected to pick up for the official start of the 2013 construction season.

“So far everything has run fairly smoothly,” said Tom Hesmond, project manager for Brayman Construction. “With the warmer weather, we should be picking up the pace.”

Hesmond said the bridge is still on target to be open to traffic in the fall of 2015.

Also on track is the new water and sewer line work that has kept a section of South Third and Jefferson streets closed for about a month. Work began on March 11 and is expected to be closed for a total of 45 days, detouring traffic until the road reopens.

Ed Callicutt, bridge engineer with Figg, the design consulting firm working on the project, said there has been minimal disruption to traffic thanks to the construction crew from Brayman executing the work properly.

Brayman Construction of Saxonburg, Pa., began work on the two-lane cable-stayed bridge in the spring of last year. As of April 1, about 24 percent of the work had been completed at a cost of about $22 million.

David Bame, construction engineer for the Ohio Department of Transportation, said current work on the Kentucky side of the bridge included substructural work.

“We are trying to complete the river work with piers 3 and 2,” Bame said.

Upcoming for this year is work to cast the footing for the Kentucky and Ohio towers and setting structural steel at the Kentucky approach and concrete deck.

“This will be the year you’ll start to see the towers coming up out of the water,” said Kathleen Fuller, public information officer for ODOT.

Wednesday also kicked off National Work Zone Safety Awareness Week with ODOT and the Kentucky Transportation Cabinet District 9 jointly hosting a press conference to encourage motorists to be aware of the construction season.

“At all times, it is important that motorists use caution when traveling in work zones,” said ODOT District 9 Deputy Director Vaughn Wilson. “We do all we can to ensure the safety of our workers and the motoring public, but to see a real reduction in work zone crashes, certain driver behaviors need to change.”

“As highway workers, we train flaggers, put up work zone signs and barrels, provide online listings of road work, and put our best people on the job to keep motorists safe,” said Kentucky Transportation Cabinet District 9 Chief Engineer Bart Bryant. “And, as drivers, we all need to take a few simple steps, such as slowing down and reducing distractions, to keep from becoming one of those persons killed or injured.”