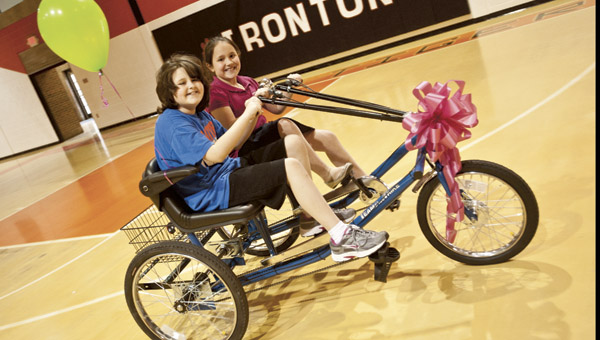 Katie Scott rides her new two-seat bike with Meredith Humphreys Thursday at the Conley Center. Scott, who just turned 10 years old, received the bike as part of a fundraising effort by students. Katie was diagnosed with a brain tumor at seven months old that has caused her to lose her sight.

Like other children her age, 9-year-old Katie Scott wanted a shiny new 10-speed bicycle for Christmas.

Unfortunately, unlike many other children her age, Katie is legally blind, a side effect of a brain tumor she was diagnosed with when she was only 7 months old.

“Her vision has decreased quite a bit,” said Cindy Scott, the girl’s mother.

Scott said Katie, a fourth-grader at Ironton Elementary School, can see about 3 feet in front of her, but even that field of vision is blurry. Katie previously was able to ride a traditional bike with supervision, but her worsening eyesight now prevents it.

To see to it that Katie would still get to experience childhood on a bike with the wind in her hair, teacher academy students from Dawson-Bryant and Ironton high schools raised funds to buy the girl a special two-seater bicycle. The fundraiser culminated in a surprise 10th birthday party for Katie Thursday at the Conley Center at IHS.

“Oh my gosh!” Katie said, jaw to the floor, after a few students rolled her gift over to her.

The bicycle sits two people side-by-side and has two sets of pedals but only one set of handlebars and three wheels.

Katie took her inaugural ride with her friend and classmate Meredith Humphreys.

“I love it,” Katie said after a few laps around the gym.

“Look at her face,” Alisa Schause said, D-B senior. “That was the most precious thing I’ve ever seen.”

“It made me feel great,” she said, “knowing I was helping a little girl do something she loves.”

“It was an honor to do it,” said Donald Vernatter, also a senior at D-B.

Money for the bike was raised by the teacher academy students, led by instructor Sarah Humphreys, who has known the Scotts since before Katie was even born.

She said hearing of how Katie wanted a bike for Christmas, but not being able to have one, stayed with her.

“It kind of kept bothering me,” Humphreys said.

After the Christmas break, Humphreys approached her students to see if they wanted to help raise money to buy a special bike for Katie. The students decorated insulated tumbler cups and sold them for $8.

“With the extra money we raised, we also got her an iPad,” Vernatter said.

Cindy Scott said the outpouring of support from the students amazed her.

The years of treatment on Katie’s brain tumor haven’t been easy, but she has already defied the odds, her father said.

“They told us she would never walk or talk,” said J.D. Scott, Katie’s father.

Katie went through five years of chemotherapy and even traveled to Florida for proton radiation, which concluded in 2011. Right now the tumor is stable, neither growing nor shrinking.

Despite her limitations, Katie, walks and talks just like any other child.

Katie is already learning to read brail and some of her class work and tests are given orally, but Bryant said she isn’t given a lighter workload.

“She does the same work as all the other students,” Bryant said, noting Katie oftentimes makes the honor roll.

And it seems as if Katie has an interest in staying on the right academic track. She told the teacher academy students she too wanted to participate in the program when she grows up.

The Lawrence County Commission has approved borrowing $30,000 from the county’s Neighborhood Investment Program to fund repairs to the courthouse... read more