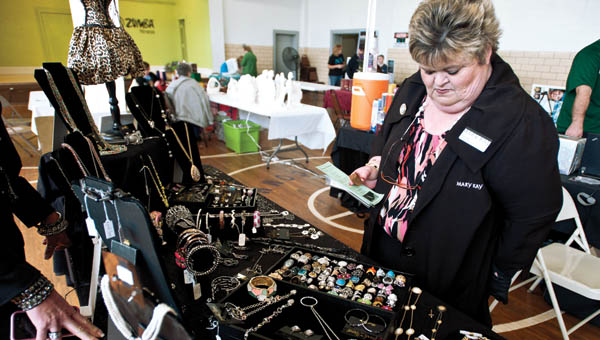 Cathy Burt, with Mary Kay, browses through a selection of Park Lane Jewelry at the booth of Cheryl Akers during the Small Business Fair Saturday morning at the Chesapeake Community Center.

CHESAPEAKE — Trina Marcum stretched out the long strip of hot pink fabric and began ironing it with delicate strokes. This was the beginning of one of the many custom-made lanyards she would make on Saturday.

Marcum had brought her cottage industry, Trina’s Treasures, to the Chesapeake Community Center for its first-ever Small Business Fair. She got into making lanyards, worn around the neck to hold keys or the like, because of two factors.

Pinterest is where she learned to make the colorful fabric key chains and her husband is the one who helped with a special part of the process — how to run the sewing machine.

“My husband taught me how to sew,” she said. “He is the seamstress. He was raised in a house with all women. Making these is a great stress reliever. It is my getaway.”

On Saturday Marcum was joined by a variety of other small business owners that ranged from Pampered Chef cookware to craft makers to NuSkin, where Tonya Simmons, an independent distributor, spent part of the morning pampering Linda Murray of Kenova, W.Va., with a galvanic face spa.

“It lifts and gets rid of wrinkles,” Simmons said. “The electrical current sends the treatment into the dermis level of the skin.”

“I think this fair is great,” Simmons said. “It has a lot of great vendors and gives us a chance to show what we have, especially with the economy.”

The fair was the brainchild of Marcum’s friend, Erica Day, who saw the advantage of a venue like this for the small businessperson. Plus, it was a chance to help out the community center where her son takes karate classes.

Upkeep for the aging center is an ongoing challenge for those in charge. Originally the proceeds from the fair were to go toward refurbishing the gymnasium floor. However, about two months ago, the boiler at the center went out and now all funding is earmarked for its repair.

“I had (the proceeds) earmarked for the floor, but have to use it for the necessities,” Damron said.

Still despite the change, Damron and the vendors found the fair a positive experience.

“I think the turnout is great and we have a lot of variety in vendors,” Day said.