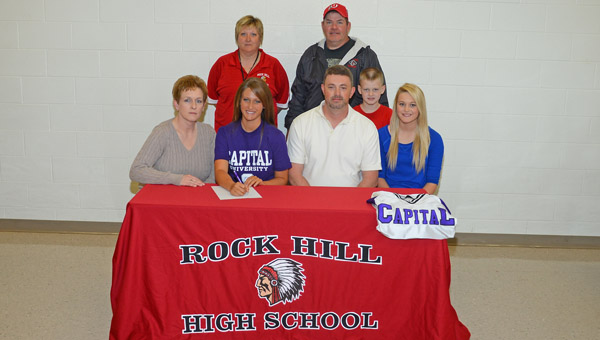 PEDRO — Kaelynn Ellis wants to transfer her ability to track down fly balls into tracking down criminals.

The Rock Hill Redwomen outfielder/infielder knows how to chase down fly balls. After signing with Capital University on Friday, she plans to use her education to track down lawbreakers.

“I want to double major in criminology and psychology. I want to work with the FBI,” said Ellis.

For now, she’s just going to enjoy playing softball, a sport she began playing in the sixth grade.

“I love it. I played travel ball this year. I could play it all the time,” said Ellis.

Even though Ellis decided to play softball at the college level, she wasn’t expecting to continue her career.

But as she was sifting through colleges, she decided on Capital over Heidelberg, Wright State and Marshall.

“I really like the facility that Capital had. It was close and it felt like home,” said Ellis. “I did an overnight and practiced. I didn’t consider softball until I went up there and I felt like I was at home.

“I hadn’t planned on going up there and talking to the softball coach. Once I got there it just felt right. I felt like I should continue. I don’t want to stop after my senior year.”

Ellis is the lone senior for the Redwomen. Rock Hill head coach Mary Jane Harper said Ellis and the team’s four juniors have proven not only to be good players but good leaders, too.

“She’s a great player. She plays outfield but this year we’ve had to move her into the infield. She’s doing a fine job at that,” said Harper.

“She’s a leader. She’s the only senior and she and the other juniors are leaders. All the kids look up to her and the juniors.”

Harper added that Ellis and Capital were made for each other.

“She’s improved a lot and I think she’ll be a good fit for Capital and she’ll get to play. She hits well. Her fielding is good, too, especially for the outfield. She’s an excellent outfielder,” said Harper.

Ellis is excited about the opportunity to play in college, but she knows there’s still a lot of work ahead.

“I have a lot of things I’ll have to adjust to, but it’ll be worth it in the end. There’s always room to get better. I think I have the potential to do it and play,” said Ellis.

Capital is known for its stringent academics. Ellis said the athletic department is very understanding about the importance of academics.

“They have study halls on Sundays and all the girls have to attend so they don’t get behind, and they make sure we’re caught up on our grades and that we’re in class,” said Ellis.

Kaelynn is the daughter of Julie and Les Ellis.