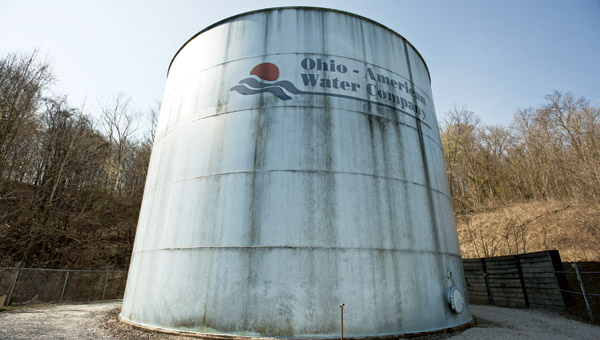 Township trustees push for running water for under served residents

BURLINGTON — On a hot spring morning Ruby Butcher puts her gardening shears down on her porch swing to sit and talk about water.

Butcher likes water, likes it so much she’d like to see more of it flowing freely out of the tap on her kitchen sink or out of the shower head above her bathtub. But, for the past 54 years, Butcher has never had that experience. When she turns on a faucet, she has to make sure every drop counts. If she doesn’t, she may not have enough to get through the day.

Butcher lives in a long, slim frame house on top of Macedonia Road hill in Burlington, the only home she has known since she married her husband a half-century plus 4 years ago. Standing on that ridge is as close to the heavens as one can get in Lawrence County.

“My husband was raised here,” Butcher said. “The Butcher family has been here for 100 years. It is hard to let go of something.”

And Butcher isn’t about to, even though she lives day-to-day treasuring water drops as if they were pure gold. That’s because Butcher’s water comes from a well with a submergible pump and a cistern. To take a shower, she has to turn on the water to get wet, then turn it off, lather up, then turn it on again to rinse.

“You save water and watch it,” she said. “Once a week when nobody is using it, I will do a load of clothes. I have to do laundry or take a shower.”

Doing both at the same time can mean no water for something else later on in the day.

There are 26 other houses near Butcher in the same situation and now the Fayette Township Trustees have turned getting water lines to them a mission. So much so they are vowing to do the grunt work themselves.

“There are families near the biggest businesses in Lawrence County and they don’t have water,” Mike Finley, Fayette trustee, said looking over at Sam’s Club and Walmart on U.S. 52.

Already Finley has approached the Lawrence County Commissioners to ask for $260,000 in Community Development Block Grants to go toward the project to put in three miles of 6 to 8-inch lines. But that just over a quarter of a million dollars is only about 9 percent of the cost simply for the materials to get water to those 27 connections, says Greg Odell, area manager for Aqua Ohio, the company that supplies water to Burlington-South Point.

Then a smaller storage tank on the hill would be needed.

“You put all that together and it is a price tag of $3 million,” Odell said.

Until May of 2012 Ohio American was the company that provided water to approximately 3,500 customers in the South Point-Burlington area getting its supply from West Virginia American Water in Huntington. Then Aqua Ohio, a division of Aqua America, bought Ohio American. Aqua America, headquartered outside of Philadelphia, Pa., has 2.8 million customers in nine states.

And it’s those current customers uppermost in Aqua Ohio’s mind as it considers this project.

“We cannot burden our customers with those costs because of the project,” Odell said. “What needs to be done is look to alternative funding sources. For this situation you really need to find grant money. That is the challenge. Where you can find the funding. That is a challenge that I am looking into. It is not something that will happen in a timely manner. If we keep trying to find the funding and have our legislators look for that.”

But as Finley sees it, the Macedonia hill district is one of the largest sections of people in Fayette Township without running water lines and doing it now is better than years later.

“People have been living up there for 54 years,” Finley said. “They are in my township. It is my duty as a trustee to try to get water.”

The trustees, who would hire excavating equipment from a private company, expect the project would cost 30 to 50 percent less because they will do the work themselves.

An offer Odell says Aqua Ohio appreciates, but the project costs still come down to the materials: $1 million in pipe without fittings; a quarter of a million for the booster station and a half million for the storage tank.

“We would really like to see this happen,” Odell said. “We really want to help the people and are open to alternative funding and any suggestions we can get to help it along. But we really can’t adversely affect our current customers. Otherwise they would see their rate go up substantially.”

If those water lines are ever trenched up the ravine to Macedonia hill, it will be a prized day for Butcher and one too long in coming.

“You go on top of any hill and they have water,” she said. “I don’t know how we can go on for 54 years and no one has tried to bring water. To run a bathtub and sit down in it, it would be great.”