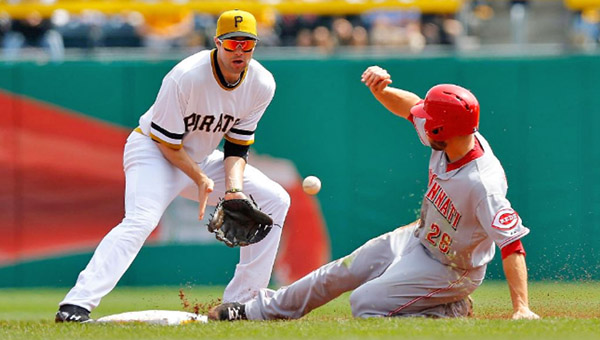 Cincinnati outfielder Chris Heisey (28) steals second base ahead of the tag by Pittsburgh’s Neil Walker. Heisey’s effort was wasted as the Reds lost their fifth straight game on Sunday, 10-7. (Courtesy of the Cincinnati Reds.com)

The Reds’ latest defeat came in excruciating fashion, when they wasted a five-run, seventh-inning lead in a 10-7 loss to the Pittsburgh Pirates.

“It’s a tough loss, the toughest one we’ve had in a long time,” Reds manager Dusty Baker Baker said. “That was a rough day for all of us.”

Pittsburgh scored four times in the seventh inning and six times in the eighth to rally for its fifth win in six games following a 1-5 start.

Backup catcher Michael McKenry hit his second home of the game, a two-run drive that tied the game 6-6 and started the big eighth inning off Jonathan Broxton (0-1).

McKenry had the first two-homer game of his four-year major league career, and Starling Marte hit a tiebreaking two-run drive in the eighth.

McKenry homered off Mat Latos leading off the seventh. Travis Snider’s RBI double off the top of the right-field wall — upheld after a video review — chased Latos, Andrew McCutchen doubled in a run against Logan Ondrusek and pinch-hitter Gaby Sanchez had an RBI single off Manny Parra.

“It was low and in the zone and he hit it,” Latos said. “He did what he was supposed to do and you’ve got to give him credit.”

Jack Hannahan’s pinch RBI single off Jared Hughes (1-0) boosted Cincinnati’s lead to 6-4 in the eighth, but Broxton walked Pedro Alvarez leading off the bottom half and McKenry’s second homer tied it. Jose Tabata walked with one out, and Marte’s first home run of the season gave the Pirates an 8-6 lead.

“You just don’t expect to do that kind of damage against pitchers Latos and Broxton,” McKenry said.

“They’re very good pitchers and Latos has been particularly tough on us. I didn’t know if we’d get to him the way he was pitching.”

Pittsburgh’s three homers doubled its total this season. The Pirates have 32 runs during a 5-1 spurt after scoring eight in a 1-5 start.

The two homers and six runs allowed tied career highs for Broxton, a nine-year veteran. Baker attributed Broxton’s struggles to rustiness as he had not pitched in a week.

“He warmed up three times yesterday just to try to stay sharp,” Baker said. “We need to get him some work. We need to start getting some more leads so we can get him in there more often.”

Walker had three hits for Pittsburgh, while Snider hit two doubles and Marte and McCutchen had two hits each.

Cincinnati’s Brandon Phillips drove in three runs on a pair of singles, a day after attending his grandfather’s funeral.

Cincinnati’s Shin-Soo Choo had two hits and has reached base in all 12 games this season. Todd Frazier broke an 0-for-16 slump with a third-inning single and Chris Heisey ended a string of 14 hitless at-bats with a single in the second.

The Reds’ Joey Votto led off the ninth with his first home run since June 24. He also drew three walks.

Latos gave up three runs and nine hits in 6 2-3 innings. He is 4-0 with a 2.55 ERA in 10 starts dating to August and has 48 strikeouts in 45 innings during seven career starts against the Pirates.

“The bullpen normally does a nice job of picking us up and today was one of those days,” Latos said. “We’ve got to forget about it and come back tomorrow.”

NOTES: The Reds are not expected to update RHP Johnny Cueto’s injury status until Monday; he left Saturday night’s game in the fifth inning with a strained right triceps. A 19-game winner last season, was to be examined by team doctors in Cincinnati late Sunday afternoon. … Pittsburgh optioned INF/OF Josh Harrison, a Cincinnati native and former University of Cincinnati star, to Indianapolis to open a roster spot for Irwin. … Heisey was dropped from second to seventh in the batting order. … Cincinnati opens a three-game home series against Philadelphia on Monday night with RHP Bronson Arroyo (1-1, 5.25) facing LHP Cliff Lee (2-0, 1.08). … RHP James McDonald (1-1, 3.75) will start for the Pirates on Monday when they begin a three-game series against St. Louis and RHP Lance Lynn (1-0, 4.50).

AUGUSTA, Ga. (AP) — Adam Scott finished the job this time, and put an end to more than a half-century... read more