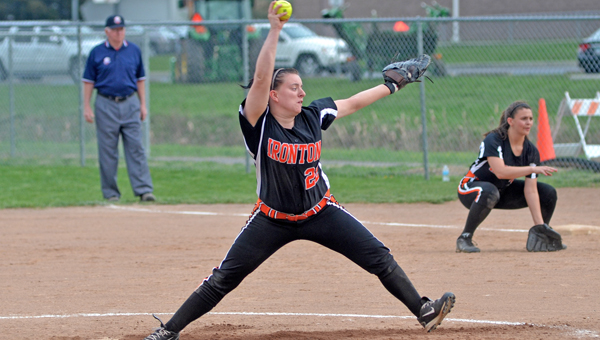 They say things come in 3s. They did for the Ironton Lady Fighting Tigers on Monday.

Ironton got all of the three facets of the game — pitching, hitting and defense — plus a couple of three-run innings as they blanked the Coal Grove Lady Hornets 8-0.

Erin Wetzel turned in a stellar effort on the mound with a four-hitter. She struck out four and did not walk a batter. She retired the first 11 batters she faced.

“Erin pitched well, we had timely hitting and this side of the infield (third base and shortstop) owned it tonight,” said Ironton coach Missy Fields.

Laken White made several nice stops at third base and shortstop Rebekkah Potter used her cannon of an arm to gun down several runners, one after fielding a ball deep in the hole between shortstop and third base.

After a scoreless first inning, Ironton struck for three runs in the second when White singled, McMackin walked and Monk tripled. A throwing error on the play allowed Monk to score.

Three more runs scored in the third to make it 6-0.

Andi Kratzenberg singled and White reached on an error to put runners at second and third. McMackin singled home the runners, stole second and scored on a hit by Taylor.

The final two runs scored in the fifth.

Taylor reached on a missed third strike, Hannan singled and an outfield error allowed Taylor to score. Hannan went to third and scored on a hard ground out to shortstop by Potter.