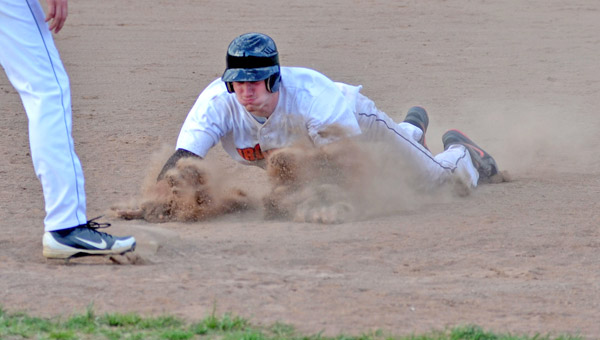 Ironton Fighting Tigers’ Aaron Stephens kicks up the dirt as he does a head-first slide into third base. Stephens had two hits and scored three runs as Ironton beat Green 12-2. (Kent Sanborn of Southern Ohio Sports Photos.com)

The Ironton Fighting Tigers were a team in motion.

Ironton was moving around the bases often as they beat the Green Bobcats 12-2 on Tuesday in six innings.

“We put the ball in play and we were aggressive on the bases. It was a good overall team effort,” said Ironton coach Larry Goodwin. “We are still striving to get where we want to be as a team.”

Ironton (3-4) pounded out 10 hits including an inside-the-park home run by Steve Easterling who went 2-4.

Battise got the win with a six-hitter. He stuck out seven and walked only one.

They scored three more in the third inning to lead 8-0 and coasted the rest of the way.

Green was only able to manage a two-run double by Matt Howard in the fourth inning.

Ironton plays at Chillicothe on Thursday and hosts St. Joseph on Friday.