Votto heating up as Reds roll by Marlins 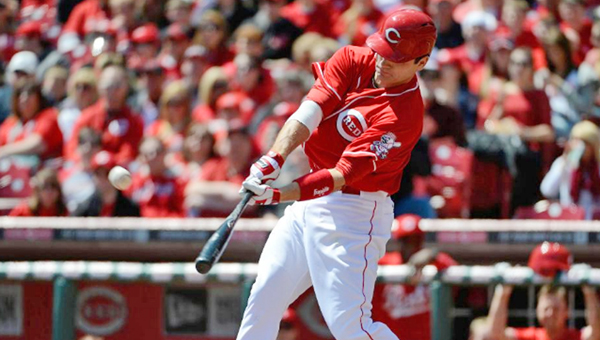 Cincinnati first baseman Joey Votto connects on a home run during the first inning of Sunday’s game. Votto had three hits as the Reds beat the Miami Marlins 10–6. (Courtesy of the Cincinnati Reds.com)

CINCINNATI (AP) — Among the few people not concerned with Joey Votto’s home-run drought were the first baseman his Cincinnati Reds teammates.

Votto seems to be getting hot and shaking off his power outage. He homered and got three hits for the second straight day, and the Cincinnati Reds beat the Miami Marlins 10-6 Sunday for their sixth win in last seven games.

Votto missed 48 games last season with a knee injury, and his April 14 homer against Pittsburgh was his first since June 24. He’s homered in back-to-back games for the first time since Sept. 10-11, 2011, at Colorado.

“Before I got hurt, I had 14 home runs,” Votto said. “If I’m not hitting home runs, I can help win games in other ways. I don’t feel obligated to hit home runs to quell people’s concerns. Is quell the right word?”

“I told you he was going to hit,” Baker said. “Everybody was more worried than we were. Water seeks its own level. If you can hit, you’ll hit. You don’t just stop hitting.”

Brandon Phillips drove in the go-ahead run for the second straight day and Todd Frazier hit a three-run double in an eight-run seventh inning for the Reds, who won three of four from the Marlins and improved to a major league-best 10-3 at home.

After trading most of their best players in an offseason payroll purge, the Marlins have the worst record in the big leagues at 4-15 — the poorest 19-game start in team history.

With the score 2-2, Choo drew Cincinnati’s fifth walk off Alex Sanabia (2-2), who also hit Choo with a pair of pitches. Singles by Xavier Paul and Votto loaded the bases, and Phillips had an RBI single against Jon Rauch. Paul scored when right fielder Giancarlo Stanton bobbled the ball for an error.

Phillips had a game-ending sacrifice fly in the 13th inning of Saturday’s 3-2 win.

Devin Mesoraco added an RBI single, Frazier hit a bases-loaded double off the right-field wall for an 8-2 lead, Choo followed with an RBI double and Paul greeted Tom Koehler with a run-scoring, ground-rule double that bounced into the right field stands and back onto the field.

Logan Ondrusek (1-0) struck out the side in the seventh to win in relief of Homer Bailey, who allowed two runs and seven hits in six innings with eight strikeouts and three walks.

“Sanabia knew the situation,” Redmond said. “Yesterday’s game took a lot out of our pitching staff. I thought he pitched a great game. If we had the lead, we would have probably pitched it differently. Rauch was our only fresh arm. We had to bring him into a tough situation.”

Miguel Olivo, who spent most of spring training as a non-roster player with the Reds before signing with Miami, hit a pinch three-run homer off Manny Parra in a four-run ninth.

Votto didn’t need to wait long to flash his rediscovered power, homering in the first inning on the first pitch he saw in the game.

“He’s such a good hitter,” Frazier said. “That’s the kind of stuff we talk about — trying to get your energy back and your swing going.”

Chris Valaika’s had a tying single in the second. The Reds went back ahead in the fifth when Bailey beat out an infield hit on a dribbler up the third-base line and scored from second when Votto singled and center fielder

Justin Ruggiano overran the ball for an error. Valaika had another tying single in the sixth.

NOTES: The Marlins started 5-14 in 1995, 1998 and 1999, according to STATS. … The Reds placed C Ryan Hanigan on the 15-day DL with a strained left side. Hanigan, also dealing with a bruised left thumb, injured his oblique reaching for a high fastball thrown by Aroldis Chapman on Friday night. The contract of C Corky Miller was selected from Triple-A Louisville, and RHP Nick Masset was moved to 60-day disabled list to clear a spot on the 40-man roster. … Choo has been hit nine times, tying the Reds record for a month set by Mike Donlin in May 1903, according to Elias Sports Bureau and reported by the Reds. Shoo has reached base 11 times in 12 plate appearances over the last two games. … Stanton finished the series 4 for 18 with eight strikeouts and is hitting .188.

Jim Walker jim.walker@irontontribune.com   The bats took awhile to wake up, but when they did, they wouldn’t go back to... read more