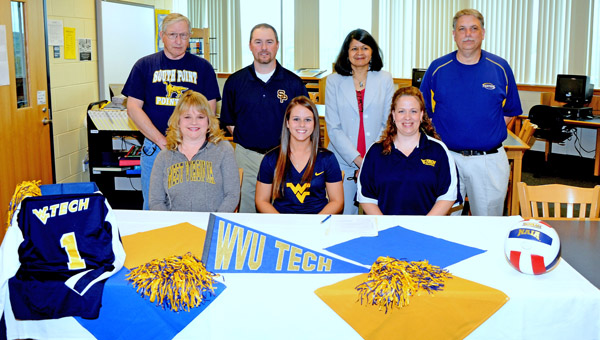 That is how West Virginia Tech head volleyball coach Jaclyn Buchanan was feeling after signing South Point Lady Pointers’ senior Brianna Whaley to a letter-of-intent to play for her program.

Looking for a defensive specialist who could fill in at some other spots, Buchanan liked what she saw during a team tryout. Upon further examination, she likes Whaley even more.

“She’s a very aggressive, very talented individual as well as academically strong on and off the court and that helps as well. She’s a very smart player who works hard and is dedicated, so what more could a coach ask for?” said Buchanan.

“I’m definitely looking at her being a defensive specialist — a libero — starting right away in a position we need.”

Whaley — who also plays basketball and softball — said Tech was the perfect fit, especially since it offered a health and services administration major.

“I thought about softball, but volleyball is my favorite so I wanted to pursue that. I looked at Denison and Wilmington and they didn’t offer the major I wanted,” said Whaley.

The feeling was mutual. Buchanan said Whaley meshed well with the current players during the tryout.

“I feel like she’s going to transition pretty well. It’ll be slow at first. She’s just a freshman coming in, but she really seemed to jell with the girls when she came for a tryout and I think that was the key,” said Buchanan.

“If they can get along and start that jelling process, that’s half the battle for me.”

Even though the opportunity to play immediately awaits, Whaley knows it won’t be easy.

“Everyone serves so much harder. It’s going to be crazy. You have to be quick, but I’m going to be ready,” said Whaley.

“I’m just excited to play, even if I’m just on the bench. It’s just an awesome experience to play with these girls and it’s awesome to move on to the next level.”

Although Whaley has played other sports throughout her career, she admitted she won’t attempt playing any others during her collegiate career.

“Probably not. I’ve played sports all year-round — different ones — throughout my entire high school career, actually since I was little, but I don’t think I’ll be able to do that. I need to focus on school and volleyball.”

Phillips give Reds win on his bobblehead day

CINCINNATI (AP) — Brandon Phillips didn’t want to let his bobblehead day go by without doing something good. He did... read more