Chesy students learn to reuse, to save planet 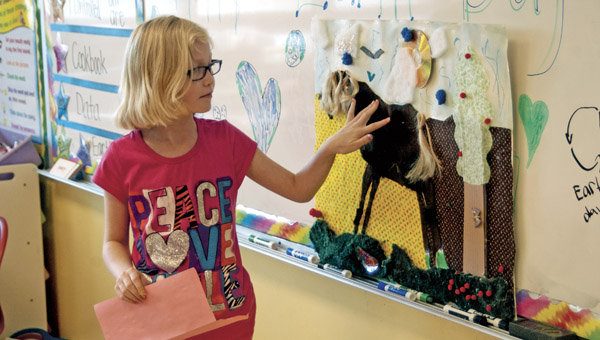 Tatianna Shellkopf created a collage of a horse out of her own hair, a CD and cardboard.

CHESAPEAKE — Recycling some of the things around his house for an assignment in his second grade class at Chesapeake Elementary ended up with dual purpose for Haven Perkins.

First, Haven made a contribution to this year’s Earth Day projects at the school and secondly, and just as importantly, he found a way to keep his worldly possessions safe.

Haven’s project was taking a used skateboard and turning it into a shelf he can mount in his bedroom at home at just the right height to store things on.

“I want to keep my little brother from going through my stuff,” he said.

All the second grade classes at Chesapeake were given the assignment to create an everyday household item out of things headed for the garbage can.

“They were to make something they can reuse,” Christi Kitchen, a second grade teacher, said. “Something to have and to reduce, reuse and help the earth.”

The first Earth Day in this country was April 22, 1970, and the event is considered the start of a long-term environmental movement that saw the passage of such pieces of legislation as the Clean Air Act.

Throughout Monday morning students were front and center explaining their projects to their classmates and where they got their inspiration.

Tatianna Shellkopf took the assignment personally as she created a collage of a horse in a paddock, even writing a poem about it.

“When I got my hair cut, my mom thought I could use that for the mane and tail,” Tatianna said. “I used a gold CD for the sun and pom poms for apples and cardboard for the trees.”

Cole McKinney sent his project out of this world as he took two liter bottles, a box, a paper towel tube and some streamers to create a toy jet pack.

Andrew Davis turned a milk jug gold and pasted on some checkers for eyes to make his own piggy bank. Julian Pennington took a cereal box and a wrapping paper tube to create a guitar.

“You can make something like a toy and it won’t cost any money,” Julian’s teacher Ashley Hall said. “We want them to learn to reuse items that would go to the trash and how to save the earth.”

CHESAPEAKE — The village of Chesapeake could get bigger if the officials get their wish. At its April meeting Chesapeake... read more