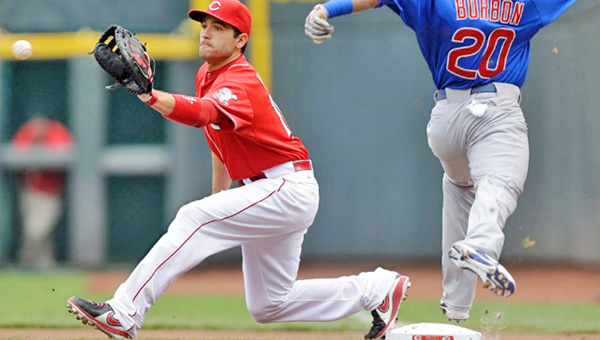 Cincinnati Reds’ first baseman Joey Votto stretches to catch the throw as he gets the runner out on a close play. The Reds beat the Chicago Cubs 1-0. (Photo Courtesy of the Cincinnati Reds.com)

CINCINNATI (AP) — Todd Frazier gave Mat Latos all the run support he needed, and Latos gave the Cincinnati Reds exactly what they needed to finish off a 10-game homestand in style.

Latos retired the first 10 batters and 15 of the first 16 he faced and mostly spared an overworked bullpen, and Frazier hit a long home run and the Reds beat the Chicago Cubs 1-0 Wednesday.

“This is what we wanted so bad,” Reds manager Baker said. “This sets us straight for a couple of days.”

With one out in the sixth inning of a scoreless tie, Frazier blasted a 2-1 pitch from Jeff Samardzija 480 feet to straightaway center field to increase his team-leading home run total to six. The homer, which bounced high off the batter’s eye, is the longest at Great American Ball Park this season and the seventh-longest in the facility’s 11-year history.

“I was just trying to get a fastball,” said Frazier, who became the first Cincinnati player to homer in a 1-0 win since Sean Casey against St. Louis on Aug. 26, 2004. “I haven’t seen too many lately. I got one, and I took advantage of it. I took a couple of steps and figured it was out, but I didn’t know how far until I saw it hit the (batter’s eye).”

Latos (1-0), the victim of two blown saves among his first four starts this season allowed four hits and a walk with four strikeouts. He had to rely solely on his two- and four-seam fastballs, too.

It turned out not to be a problem.

“In the bullpen, I had a really good slider and changeup,” said Latos, who’s strung together 11 consecutive scoreless innings. “I don’t know what the hell happened. It’s tough. Everybody in the big leagues can hit the fastball. I had to focus on hitting spots, keeping the ball down and away and getting them to hit it on the ground.”

Jonathan Broxton replaced Latos with two runners on base and nobody out in the eighth. Both runners moved up on Cody Ransom’s sacrifice bunt, but pinch-hitter Alfonso Soriano struck out and shortstop Zack Cozart went deep behind second base to flag down David DeJesus’s grounder and throw him out to end the inning.

“I was going to throw it regardless, because there were two outs,” Cozart said. “I saw out of the corner of my eye that he wasn’t too close to the bag. I’ve been struggling at the plate lately, so to make a play like that makes you feel pretty good.”

Cubs manager Dale Sveum said that’s just the way it’s been going for the Cubs, who are 1-5 on their current road trip.

“That was an unbelievable play in that situation,” he said.

Aroldis Chapman pitched the ninth for his fourth save. Latos’s effort left Cincinnati’s starting pitchers with a combined 5-0 record and 1.54 ERA on the homestand.

Samardzija (1-4) had his fourth consecutive loss after beating Pittsburgh on Opening Day. The right-hander allowed seven hits and three walks with eight strikeouts and a wild pitch.

The Reds had baserunners in each of the first five innings, including the third, which Devin Mesoraco and Latos led off with singles before Samardzija struck out Shin-Soo Choo, Cozart and Joey Votto — the top three batters in Cincinnati’s lineup.

The Reds wrapped up the home stand, one of two of 10 games on their schedule this season, with eight wins despite playing two games that lasted 13 innings, another that went 10, a third that was suspended almost 19 hours from one night to the next day by rain, and Wednesday’s game, the start of which was delayed 89 minutes by rain. They won eight games on a homestand of 10 or fewer games for just the sixth time in franchise history and the second in two years. They went 8-2 against St. Louis, Arizona and Milwaukee on a homestand last July.

“This was a weird home stand,” Cozart said. “It was a battle every game.”

NOTES: A sharp one-hopper by Julio Borbon, the second batter in the game, glanced off Latos’s right foot. He recovered to grab the ball and throw Borbon out and stayed in the game after a couple of practice tosses in front of manager Dusty Baker and trainer Paul Lessard. … Samardzija’s effort to catch Choo’s bouncer in the bottom of the first left him with a slight cut on his pitching hand, but it quickly closed enough to allow him to continue. … Choo, who went into the game leading the major leagues with a .535 on-base percentage, has reached base at least once in all 21 of the games he’s played this season.

Jim Walker jim.walker@irontontribune.com   The NFL draft could just be an alias. It may be the second coming of the... read more