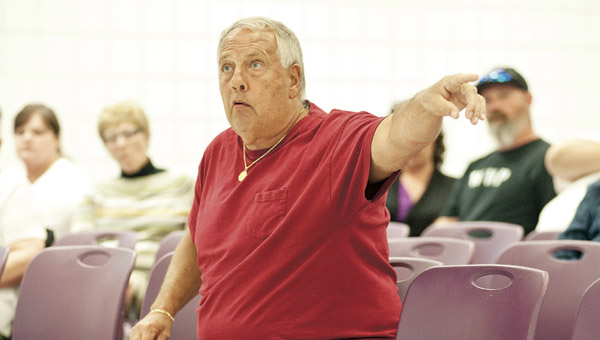 Steve Wyant, a West Chesapeake resident, airs his opinions and concerns over annexation.

CHESAPEAKE — The group was small but vocal as approximately 40 West Chesapeake residents came to a public hearing to say whether they want to be part of the village next door.

“We are going to talk about why we want you to join our village,” Chesapeake Village Councilman Paul Nathan Hart told the audience at the Chesapeake Middle School Thursday night.

Earlier this month Chesapeake Village Council voted to proceed with the process to annex the two miles west from the village limits at Triangle Park to about half of the Lawrence County Airport.

There are approximately 500 residents affected.

Among those in opposition to the annexation are the Union Township Trustees who don’t want the 730 parcels, plus that portion of the airport, taken out of the township.

“There is the impression the township trustees were angry with us,” Chesapeake Mayor Dick Gilpin said. “They are not angry. They are not for this. We do not intend for this to be a competition between us and them. This is the environment for future economic growth.”

For those pieces of property to be annexed a majority of the parcel owners must sign petitions in favor of it. Then, after those signatures are verified, the decision rests with the Lawrence County Commissioners.

Among the advantages to annexation, village officials say, are increased police protection that could patrol the three schools that would become part of the village, and more grant money for infrastructure improvements and fire protection.

“For 107 years we have been separate,” Hart said. “It is time to join together. It makes sense. If we share resources together, we will come out way far ahead.”

However, some residents disputed those advantages saying the response time of the Lawrence County Sheriff’s Office has been adequate for them and gaining such improvements as additional sidewalks through grant money is not that much of an advantage.

“I don’t feel we need Chesapeake Police setting up speed traps,” Steve Wyant, a west end resident, said. “I don’t think we need you. We are doing just fine. Our trustees do just fine.”

Some in opposition questioned if after annexation an income tax would be imposed. Officials gave no comment other than they hoped that wouldn’t happen.

At the heart of the annexation issue is the future of the airport. The Lawrence County Commissioners are exploring the possibility of developing it commercially.

If that happens and it is annexed into the village, Chesapeake would receive a portion of the property tax revenue.

“It is all about economic development,” Union Trustee Rick Gue said. “What do you propose to do for the people that we haven’t? I hear the police department. This is not what it is all about. What are you seeing that a lot of people don’t see?”

Commission President Bill Pratt, the only commissioner to attend the meeting, said the commission won’t approve the annexation if the village doesn’t take in all of the airport or takes any of it. The commission does not want the property split.

Trustee Mike Curry asked if the airport is not developed, would the village still want the annexation. Gilpin said it would.

However Councilman Paul Hart said going after an increased tax base from developing the airport is the future.

“The airport is going to leave,” Hart said. “We need to open our eyes to the bigger picture. We have to come together. We need people to think a little bigger.”

The spotlight is on this small group of people, Pratt said, the decision they make will affect the eastern end of the county for the next 30 to 40 years.