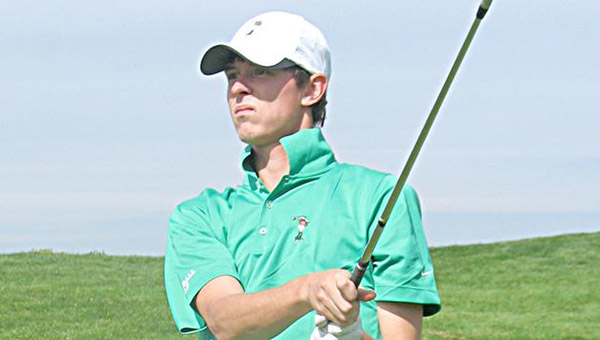 TEXARKANA, Ark. — Nathan Kerns has a history of making history.

The Marshall Thundering Herd senior golfer had the lowest third round score for any of the 60 golfers in the field as he fired a 4-under 68 at the Conference USA Tournament.

Kerns’ record round enabled him to leap four places and finish third overall as he earned C-USA first team all-conference honors. The tournament was played at the 6,935-yard Par 72 Texarkana Country Club.

The third-place finish is the highest for any Marshall golfer in C-USA tournament history. His efforts helped Marshall place fifth as a team in the tournament, its best team finish in C-USA history.

“It was a good way to go out,” Kerns said of his final tournament with the Herd team.

“I was extremely happy for the team. Ranking-wise, the NCAA had us 180-something. That was the highest ranking in the field. Everyone expected us to finish last. That shows how hard our guys worked. We always play that course pretty well. We went down there and proved what we could do.”

Marshall played its last tournament on April 7 before heading to the C-USA tournament this past week. Kerns said the team took advantage of the two-week break.

“It’s all about warm weather. We were finally able to get out every day. It’s a lot different going out in 70 degrees than 40 or 50. It’s easier than trying find that swing than when you’re wearing a sweatshirt,” said Kerns.

In past C-USA tournaments, Kerns tied for 49th as a freshman, tied for 19th as a sophomore and tied for 13th at last year’s tournament.

He has been named the Conference USA Player of the Week on three separate occasions.

He won the 2009 Ohio Golf Amateur championship. He was a three-time Division II state qualifier at Ironton High School and was a second alternate for the 2008 U.S. Junior Amateur qualifier.

Kerns shares the record for low score at the Ironton Country Club and last year set a new low score for the Sugarwood Golf Course.

Although the Herd’s season has ended, Kerns may get a chance to continue a little longer.

The NCAA Tournament will select its field on May 6. The top 65-70 teams are chosen along with the best 45 individuals not on any of the qualifying teams. Kerns currently ranks 19th among the 45.

The NCAA Tournament begins with the regionals at six different sites that include Fayetteville, Ark., Baton Rouge, La., Columbus, OH., Tallahassee, Fla., and a site in Washington.

“It would be awesome to make it, but there are no guarantees. You never know how the selection is going to go,” said Kerns.

Whether Kerns makes the NCAA Tournament or not, he plans to return to school for one more semester to get his degree. He also plans to help coach the team.

After he graduates, Kerns said he may look at turning to a pro career.

“It’s a decision I have to make. But I want to get my degree. Come January I’ll start practicing hard and play some and see what happens,” said Kerns.

NEW YORK (AP) — Short on glam, slim on glitter and no sign of Manti Te’o, the NFL draft was... read more