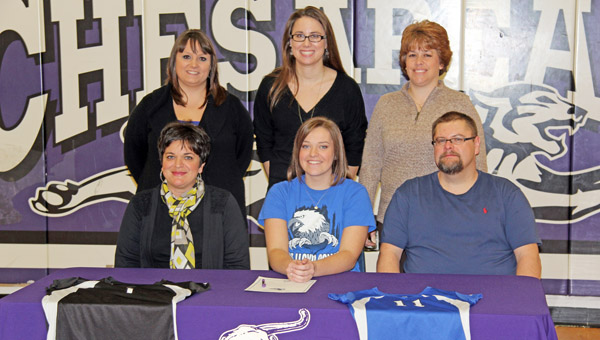 CHESAPEAKE — Macy Allen had a reoccurring dream, and now that dream is about to become a reality.

The Chesapeake senior volleyball standout has realized her dream of playing college volleyball after signing a letter-of-intent to play at Alice Lloyd College.

Allen said she fell in love with the campus after visiting during the summer.

“It was a small school and had a home atmosphere,” said Allen. “I was thrilled to be accepted and then to get a chance to play volleyball was the icing on the cake.

“I’ve always had a dream to go away to college and play college volleyball. Now those dreams will be coming true at ALC.”

Another drawing card was the fact the school had drawn national attention for its high graduation rates and low student debt rate. With only 200 incoming freshmen, Allen was excited to be one of the few who were selected.

“We’re excited to welcome Macy to the squad and we expect her to be a tremendous asset to the team,” said Lady Eagles’ coach Jolene Watts.

Allen is expected to play outside or middle hitter, the same positions she played in high school and on her summer travel team. However, she said that, “I’ll play wherever the team needs me.”

Allen understands that the college level will be more difficult than high school. She plans to spend her summer hours participating in drills, training and conditioning.

“Everyone will be on the top of their game. It will be tough to adjust to being away from home, college work and the demands of playing a college sport,” said Allen.

Allen plans to major in elementary education. She participated in the Teacher Academy Program last year at Chesapeake.