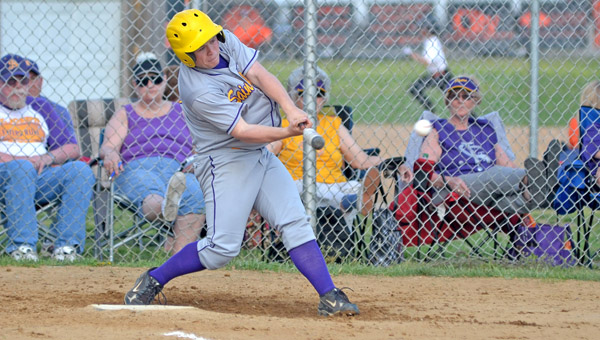 Cole Willis put together nearly a season’s worth of work in one game.

Willis went 2-4 with two home runs — one a grand slam — and drove in seven runs as the St. Joseph Flyers routed the Hannan Wildcats 14-5 on Friday.

“I was proud of Cole. He had two big hits and made a couple of good defensive plays,” said Flyers’ coach Brent Wirzfeld.

The Flyers (10-5) had 13 hits with Justin Mahlmeister going 3-3 with a double and triple and three RBIs. Chris Lewis was 2-4 with two RBIs and Hunter Pemberton went 3-4.

Pemberton also got the win with a complete game. He struck out eight, walked three and gave up 12 hits. Only three of the runs were earned.

Hannan got two runs in the top of the first inning but the Flyers answered with three in the bottom of the frame when Pemberton singled, Mahlmeister walked and Willis hit a three-run homer.

The lead went to 5-2 in the third. Joseph Payton and Mahlmeister doubled for a run and a throwing error scored the other run.

Hannan (7-9) cut the deficit to 5-4 in the top of the fourth, but the Flyers exploded for seven runs in their half of the inning.

Jacob Clark reach on an error, Lewis singled, Alexander Ward walked and Mahlmeister had an RBI single. Willis then unloaded his grand slam and it was 10-4.

Bryson Adkins was safe on an error, Eli Lewis and Clark walked and Chris Lewis hit into a fielder’s choice as a run scored.

Pemberton doubled and Mahlmeister tripled for a run in the fifth.

The Flyers final run came in the sixth when Eli Lutz singled, stole second and scored on Chris Lewis’ base hit.

WASHINGTON (AP) — Tony Cingrani started the fourth inning with a strikeout, but the batter reached on a wild pitch.... read more