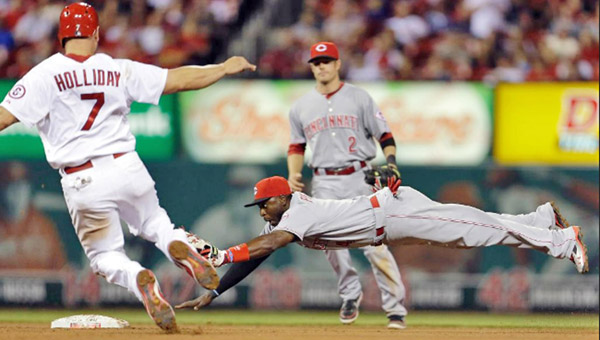 Cincinnati Reds’ second baseman Brandon Phillips dives to beat St. Louis’ Matt Holliday to the base on a force out for the final out of the fifth inning. The Reds beat the Cardinals 2-1 on Monday. (Photo Courtesy of the Cincinnati Reds.com)

If Jesse Rigsby were a movie, he’d be a box office smash.

Rigsby went 3-4 with a home run, a double and six runs batted in as the Coal Grove Hornets beat the St. Joseph Flyers 9-2 on Monday.

“Pierce threw pretty well,” said Mader. “But give St. Joe credit. They did a good job of making contact.”

The Hornets jump in front 2-0 in the first inning when Alex Bare walked and Rigsby hit a two-run homer.

Coal Grove came back with four runs in the second.

The Hornets put three insurance runs on the board in the fourth.

The Flyers (10-6) avoid the shutout with a pair of runs in the seventh.

Nance and Pennington were 3-4, Joseph 2-3 and Bare 1-2 with three walks and three runs scored as the Hornets had 13 hits.

Willis was 2-4 to lead the Flyers.

Jim Walker jim.walker@irontontribune.com   One bad apple may not spoil the whole bunch, but it can upset the apple cart.... read more