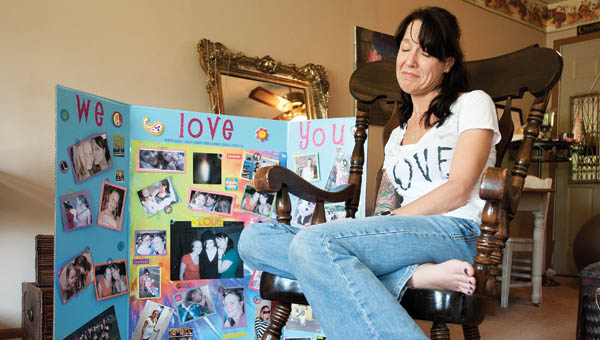 Melody York holds back the tears as she talks of daughter Cassie Owens.

She said the days following the murder of her daughter were the longest of her life.

Cassie Owens, 21-year-old student at Morehead State University in Morehead, Ky., was shot and killed at her home near campus March 6. Melody York, who lives in Ironton, said she did not know her daughter was gone until days later when her older daughter called and broke the news.

“She was my angel. My only reason for living before Jesus changed my life,” York said. “Now she really is my angel.”

Casey Shay, Cassie’s boyfriend and father of their 2-year-old daughter Madison, went to the Rowan County Detention Center and said he had shot his girlfriend two days after she was killed, according to Morehead police. Shay is charged with murder and awaiting arraignment. He is lodged at the detention center.

York said she is trying not to focus on the darkness, but move forward in the light. She said her primary concern now is Madison, and she does not want her to grow up with hate in her heart. York said she is putting together a memorial celebration to help gather memories for Madison to remember her mother when the young girl is older.

“I want to celebrate my daughter’s life, not focus on her death,” York said. “I just want to celebrate all of her awesomeness, play her favorite music and have her friends there. I have asked those coming to bring anything they have that reminds them of her so we can make a book for Madison to look at and know her mom.”

York said she cannot imagine how this will affect her granddaughter as she grows up, the questions she will have and she just wants to do all she can to ensure the situation is not harder than it has to be.

Madison is currently living with her paternal grandparents in Morehead. York is undergoing attempts to gain custody of her granddaughter.

“They are going on my past,” York said. “I have disabilities because of all the severe child abuse I went through and they wouldn’t even listen to me. I have an attorney now so I have a voice.”

York said she has a history of drug and alcohol addiction, but has been clean and sober now for five years. She said this past year has been huge in her recovery, and now with Cassie’s death feels her strength is being tested.

“I still participate in sober recovery and seek God every moment of every day,” York said. “I have a job. I have my own ministry. I was doing better than I ever have and then this happened.”

But she is still holding on to her light, her faith and moving forward without hate, York said. She said there was a time in her life where the smallest things would have put her in a deep depression. But she has learned to love herself, those around her and life and will not be brought down. She said she will stay strong for herself, for Madison and all those who loved her daughter. York said she is so thankful for the huge support group she has around her.

Cassie lived in Coal Grove with her mother until she was 16 years old when she moved to Morehead to live with her father. She was a cheerleader at Dawson-Bryant High School.

The memorial celebration will be Thursday, May 9, from 6-9 p.m. at the Central Park Bandstand in Ashland, Ky. In case of inclement weather, the event will be held at Salt and Light Worship Center. York created a Facebook page for the event and asked for people to confirm their attendance there if possible.

Making it easier to get medicine

The ribbon cutting of Fruth Pharmacy in downtown Ironton Monday morning not only officially opened the new location for business,... read more