Tell me what it’s worth? 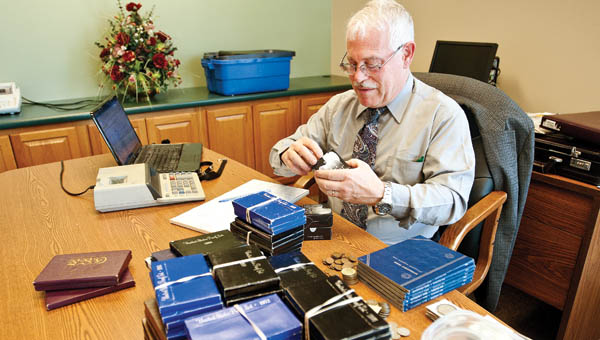 Rich Giedroyc a numismatist with HCC Inc., a rare coin management company, evaluates a large collection of coin sets, Liberty dollars, silver dimes and nickels along with collectors medallions and much more to determine their value Tuesday afternoon at WesBanco in Proctorville.

PROCTORVILLE — When Richard Nolan’s father-in-law died, Nolan found a handful of old coins that the man had owned and wondered if they had any value.

On Wednesday morning he found out they did and turned some beat-up silver into cold, hard cash when HCC Inc., did its semi-annual free coin appraisals at WesBanco in Proctorville. In the spring and fall HCC, a rare coin management company, from outside Toledo, comes to the Proctorville bank to appraise old coins and paper money.

“I was going through his safe deposit box and wanted to figure out what they were worth,” Nolan of Huntington, W.Va., said. “I tried to do a little research. Coins are like anything else. It depends on if they are worn or used.”

Many think because a coin is old it is immediately valuable. However age is not the sole characteristic numismatists look for when determining the value of a coin said Rich Giedroyc, HCC appraiser.

“Most of these are older but in bad shape and worth less,” Giedroyc told a customer who wished to remain anonymous. “There are two types of rarity — date rarity and condition rarity. It could be a common coin but the condition is so unusually good someone would want to buy it.”

One customer brought in a crisp one-dollar bill that she didn’t understand why it had been kept in her family. Across the face of the bill was the traditional blue seal that meant it was a silver certificate. At one time the bill could be redeemed for a dollar and the value of silver at that time. That changed in 1968 when U.S. Congress changed its policy. Now the piece of paper was worth a dollar and a dime.

Other finds for that customer were a Franklin half dollar now worth $8.00 and an 1908 quarter minted in New Orleans that brought in $18.

“It is not a rare date but the condition is better,” Giedroyc said.

This was the fifth year for the Proctorville branch of WesBanco to have the one-day coin appraisal, which has grown in popularity over the years,” Devinh Gibson, personal banker, said

“This morning there were 50 people line up at the door at 9,” she said.

The doctor who was the physician for the Pinnacle Wellness and Longevity Center in Ironton has requested a hearing to... read more