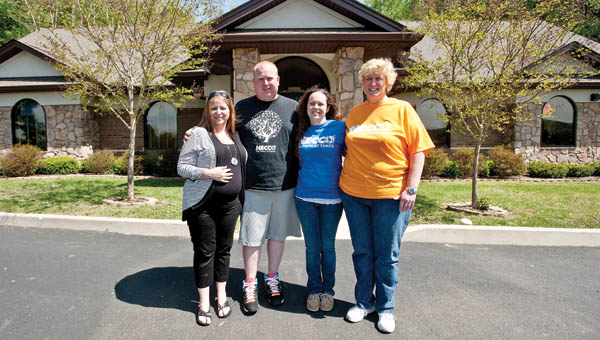 SOUTH POINT — For the past 14 years, Lloyd and Sharon Kessinger, of South Point, have been foster parents for children in need.

The Kessingers have four children of their own, and now have grandchildren, but Lloyd said he and his wife wanted to give fostering a try.

When asked why, the man said, without going into detail, that his own childhood wasn’t the best.

“We said we’d try it,” Lloyd said. “We got a little girl from Kentucky. It worked out. Then the kids starting falling out of the sky.”

Over the years, Lloyd estimated he and his wife have fostered 70 to 80 children and even adopted one.

“Most of the kids we get don’t have anything but what’s on their back,” he said.

Right now, the Kessingers are fostering three children, who were placed in their home by Necco, the South Point-based non-profit organization that works to serve children in a variety of ways, from finding temporary foster homes or permanent adoptive homes, to group home living and prevention services.

Friday, the Necco foster care program celebrated the move of its headquarters from Pedro to South Point with an open house.

Necco was founded in 1997 by the Necco family and now serves children and families in Ohio, Kentucky, West Virginia and Georgia.

Greg Thompson recently took on the role as program director at the newly relocated Necco component and said there are 16 children in foster care right now in Lawrence County, spread out over 12 families.

“We are growing and we need new families,” Thompson said.

Thompson, 30, of Huntington, W.Va., started with the company in 2005 as a case manager and resource coordinator. After getting his juris doctor from the University of Louisville School of Law in 2011, Thompson said he was approached by Necco to return as program director.

Thompson said, although he did not grow up in foster care, he never knew his father and he grew up in an abusive home. He said he was never able to talk to children’s services without his abuser present.

Thompson also said, although he succeeded academically, he felt if he was placed with foster parents like the Kessingers, they could have pushed him towards an Ivy League education.

Thompson said Necco is in need of families like the Kessingers and the others who foster children. Currently, there are eight new families in training.

Thompson said children are strategically matched with the best possible families after a referral from the Department of Job and Family Services.

The initial goal is to re-unify the children with their biological families, but if that can’t happen, Necco works to find a permanent home.

Thompson said anyone who wants to become a foster parent would get training and continuing education and Necco frequently has events where the families come together for activities and a meal.

“We like to do nice things to make sure these kids have lives as normal as possible,” Thompson said.

To find out how to become a foster parent, contact Necco at (740) 263-2626. To donate to the Foster the Future Kids’ Fund, which helps send children to theme parks, camps and extracurricular classes, visit the website at www.necco.org.

Do we encourage free speech?

In the news this week was the first ever announcement by a professional male athlete that he is homosexual. His... read more