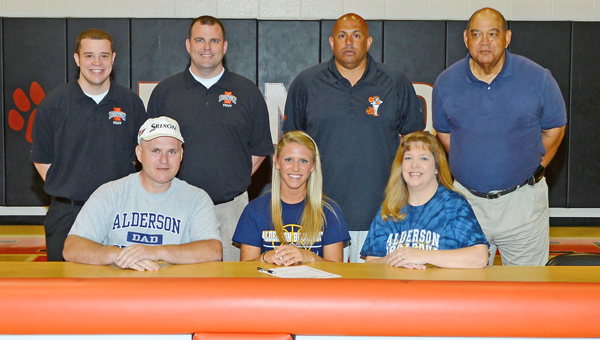 For Alicia Murphy, it’ll be like home away from home.

Although the Lady Fighting Tigers’ senior basketball standout will no longer be playing for Ironton, that doesn’t mean she won’t have the feeling she is still at Ironton.

Murphy signed a letter-of-intent to play basketball for the Alderson Broaddus Battlers, a choice she made because of the similarities between Ironton and the Phillipi, W.Va., school.

“Alderson felt like a home. It felt like Ironton. It was like a small town, it’s really tiny but once you get on campus it feels real big,” said Murphy.

“The people there, the staff, the coaches and the students are just like Ironton. They’ll say ‘Hi’ to you even if they don’t know you and ask you how your day is.”

Not only are the school and the town like Ironton, so is the program.

“Basically, it’s just like Ironton. They have a few plays, but they like to run an open game just to let their players play their roles and just play how they’re supposed to play rather than their set,” said Murphy.

A-B will be graduating six seniors, but Murphy doesn’t expect to step into a starting position. She is aware that she will have to wait her turn.

“I was really looking to go and play basketball (at the college level) and they want me to play a three or four. I’m going to fit right in,” said Murphy.

“I’m not looking to go play and start on varsity. That’s why I like that school. They have better people on their team than other schools. I can make myself better to try and be on varsity than to just put myself there. I know I’m going to start on jayvee and that’s fine with me.”

Ironton Lady Tigers’ coach Doug Graham said Murphy has the ability and work ethic to become a starter for the Battlers at some point in her career.

“If Alicia focuses and concentrates on basketball, I think she can be in the starting lineup by her second year,” said Graham.

“She can guard multiple positions. She can shoot the 3s so she can stretch the defense out. She has a good head on her shoulders so the coaches don’t have to worry about her as far as grades and academics. She’s an extremely hard worker, so I think it’ll be a good fit for her. I’m excited to see her improve over the next four years.”

Alicia is the daughter of D.J. and Rhonda Murphy of Ironton.

Orb, with Joel Rosario up, captures the 139th running of the Kentucky Derby at Churchill Downs in Louisville, Kentucky, on... read more