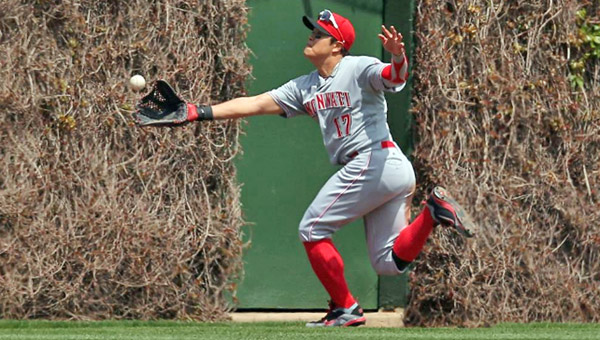 Cincinnati Reds’ centerfielder Shin-Soo Choo runs as he attempts to catch a ball hit by the Chicago Cubs’ David DeJesus during Sunday’s game in Chicago. The Reds won 7-4. (Photo Courtesy of The Cincinnati Reds.com)

Joey Votto had three hits, Todd Frazier hit a two-run single and Cincinnati finished off the three-game set against the Chicago Cubs with a 7-4 victory on Sunday.

“It looked really ugly there,” Reds manager Dusty Baker said. “This wind plays havoc with the ball. I saw Choo break back and I knew that we were in trouble. I’m just glad we held on.”

Choo stayed in the game. Phillips exited in the eighth inning. Baker said Phillips was having trouble seeing when he hit a sacrifice fly in the seventh.

“I’m just happy we had a great road trip,” said Phillips, who didn’t go into detail about his injury. “I’ll be OK. I’m just happy we won the game and won the series. I don’t want any attention. I play hurt all the time. Things happen. I’ll be in there tomorrow.”

Latos (3-0) extended his scoreless streak to 21 innings, tying a career high, but didn’t pitch past the fifth inning for the first time in seven starts this season. He struck out six and walked three.

Latos said he has been feeling sick the last couple days and woke up vomiting Sunday.

“That (fifth) inning happened, a couple fluke things,” Latos said. “The high pop fly drops. It is what it is. You can’t really do anything about it, just try to minimize the damage as much as possible.”

J.J. Hoover earned his second save.

Edwin Jackson (0-5) struggled again for the Cubs, allowing four runs and eight hits in five innings. He struck out five and walked one. He has yet to pitch past the sixth inning in seven starts this season.

The Reds got a scare in the fifth when Choo and Phillips ran into each other. The ball deflected off Phillips’ glove and hit Choo in the face. Trainers checked both players.

The Reds got two more in the seventh. Votto’s second double drove in one, and Phillips had a sacrifice fly.

“We’re obviously going through a tough stretch right now,” said Cubs reliever Shawn Camp, who allowed two runs in the seventh. “Realistically, two guys are pitching well down there (Kevin) Gregg and (James) Russell. We’ve got to pick it up a little bit. It can get ugly real fast. It’s May. It’s time for us to step up.”

The Cubs cut the lead to 6-4 in the bottom of the inning when David DeJesus scored on a groundout, but the Reds added another in the eighth.

Jay Bruce hit an RBI double off Jackson in the fourth and the Reds extended the lead to 3-0 on Frazier’s two-run single.

The Reds added a run in the fifth on Zack Cozart’s sacrifice fly. Choo scored after he singled, stole second and advanced on catcher Dioner Navarro’s throwing error.

The Cubs brought the tying run to the plate in the ninth with no outs after Scott Hairston reached on a single and advanced to third on Hoover’s throwing error to second when DeJesus hit a chopper to the mound.

Hoover got three flyouts to end the game.

NOTES: Reds OF Donald Lutz recorded his first major league hit, a single off Shawn Camp in the seventh, and got his first RBI grounding into a force out in the eighth. . Cubs pitching coach Chris Bosio said struggling reliever Carlos Marmol’s main issues are his tempo and concentration. Marmol walked two, hit a batter and allowed three runs without recording an out in Saturday’s 6-4 loss to the Reds. Marmol has two saves in four opportunities and an ERA of 5.68. He pitched a perfect sixth Sunday. . C Welington Castillo was out of the lineup Sunday after he was hit by a pitch on the ankle Saturday. Cubs manager Dale Sveum said Castillo is OK. . The Cubs will be hosting three teams in three days for the first time since Aug. 21-23, 1960. The Cubs host the Texas Rangers on Monday in a make up of the rained-out game on April 17. The Cubs begin a series against the St. Louis Cardinals on Tuesday. . RHP Scott Feldman will start for the Cubs against the Rangers on Monday. RHP Bronson Arroyo will start for the Reds in their series opener against the Atlanta Braves on Monday.