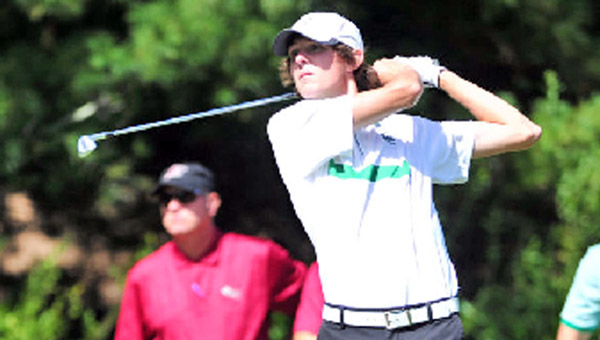 Marshall Thundering Herd senior Nathan Kerns has earned a berth in the NCAA Division I golf tournament. The former Ironton All-Ohio golfer will play May 16-18 at the Ohio State Scarlet Course. (Photo Courtesy of the Marshall University Sports Information)

The regional tournaments will be held May 16-18.

The online selection show announced the team qualifiers for each of the six regions followed by the individual selections.

“It was one of last (regionals) to be put up there on the screen so I was little nervous. I’m happy and we’ll get to work tomorrow,” said Kerns.

Kerns will also get the chance to play on a familiar course. He will play on the Ohio State University Scarlet Course in Columbus.

“It’s nice to get to play there. I don’t feel intimidated. I know I’ll have a lot of support,” said Kerns.

“I’m excited, but I’m keeping it all in perspective. I’ve got work to do. This whole season has been building toward this. I’m ready to play some good golf.”

A total of 10 individual golfers and 13 teams will participate in the Columbus regional. Among the individuals is Korey Ward of Xavier.

“I’ve played with Korey Ward a few times. That would be a dream pairing,” said Kerns.

The five teams and the individual finisher with the lowest scores at each regional advances to the finals to be held May 28 to June 2 at The Capital City Club in Atlanta.

“Nathan, along with his mom (Heather), dad (Jeff), and sister (Madison) were in the office (Monday night) during the selection and it was a really cool environment. They are all looking forward to seeing Nathan play more golf this year.”

The NCAA berth is just another honor for Kerns this season. He was third in the Conference USA tournament overall as he helped the Herd team to its highest finish in the tournament with a fifth place finish.

Braves get rare win over Reds at GABP