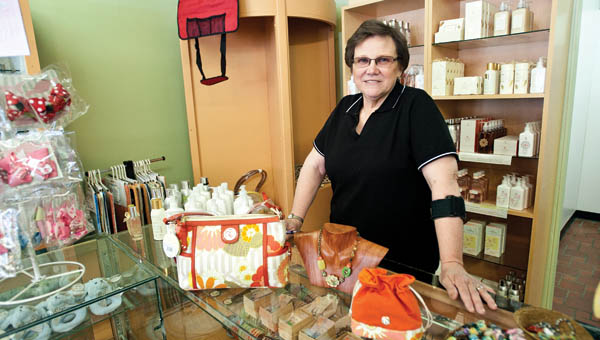 Rowena Mollett shows off some of the gift items at her new shop, Downtown Emporium, located in downtown Ironton.

Little by little, new life is being breathed into Ironton’s downtown business community, most recently with the opening of Downtown Emporium.

Located in the former Merle Norman shop on Park Avenue, the new business offers a variety of merchandise, including Thymes lotions and fragrances, Spartina handbags, jewelry and apparel.

Rowena Mollett, shop owner and owner of Dick’s Music Shop downtown, said she began work on the store about five months ago and said her goal was not to compete with other shops in Ironton, but to add more variety.

“We think Ironton needs a place to come and get unique gifts without leaving town,” Mollett said. “We wanted to offer something you don’t find anywhere else.”

Downtown Emporium opened Saturday and Mollett said she had a lot of people stop in during the bustle of cleanup day.

The shop is stocked with gifts for men and women.

A large display case in the front of the store houses the deep blue bottles of Jack Black men’s skin care and shaving products. Another display shows off Fight Like a Girl gifts that support fighting cancer.

With baby gifts, rugs, scarves, picnic baskets, reading sunglasses, soy candles and even Downtown Emporium T-shirts, Mollett hopes the business will be what its name implies.

And there is more to come, she said, even gift-wrapping and religious gifts.

“We are hoping people will realize, to keep our town going, we need to support it,” Mollett said. “We need to shop local when we can. We can’t compete with the malls. Our recovery lies in the things you can’t find at the malls. Time will tell if that bears out.”

Mollett said she often speaks with people who say they never knew Dick’s Music, or other shops, were in Ironton, because they never had a reason to visit dowtown.

“I hear that so much,” Mollett said. “We need to give them more of a reason to come downtown.”

Trying to bring the Lawrence County Jail up to state standards, even in small steps, got temporarily derailed after an... read more