HRs in 9th give Reds win 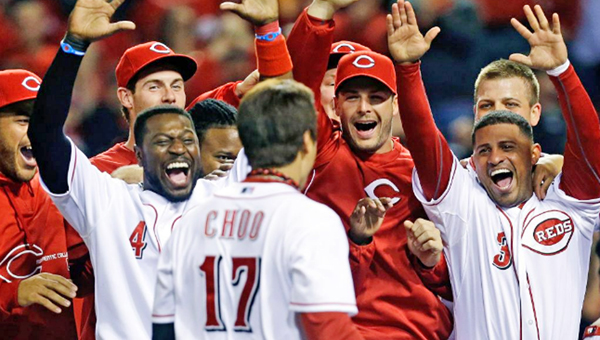 Shin-Soo Choo (17) is greeted at home plate by his Cincinnati teammates after his two-out, ninth inning walk-off home run gave the Reds a 5-4 win over the Atlanta Braves on Tuesday. (Photo Courtesy of The Cincinnati Reds)

CINCINNATI (AP) — One of the NL’s best closers was one strike away from a milestone save. Devin Mesoraco and Shin-Soo Choo turned everything upside down in a span of five pitches.

Mesoraco homered on a full-count pitch from Craig Kimbrel with two outs in the ninth inning on Tuesday night, and Choo followed with his second homer of the game, rallying the Cincinnati Reds to a 5-4 victory over the Atlanta Braves.

So sudden, and so shocking for everyone.

“He’s the best closer in the league,” said Choo, whose second career game-ending homer gave him a team-high seven this season. “This is a big game for us.”

Cincinnati’s offense has been struggling the last couple of weeks. The Reds were one strike away from another low-scoring loss after Kimbrel (0-1) fanned the first two batters in the ninth and went to a full count on Mesoraco.

Mesoraco hasn’t done much pinch hitting, but remembered something that manager Dusty Baker had advised about those pressure situations.

“Dusty says with two strikes, look for their hardest pitch away,” Mesoraco said. “I stayed on it.”

Center fielder B.J. Upton drifted toward the wall and jumped, the ball narrowly clearing his glove and landing in the first row at one of the majors’ most homer-friendly ballparks.

“That was incredible,” Mesoraco said of his first career pinch-hit homer. “I watched (Upton). Once he looked up, it was a pretty good feeling.”

Kimbrel is only one save away from No. 100 for his career. He’d blown a save last Friday by giving up his first homer of the season, a shot by David Wright that tied it in the ninth. The Mets went on to win 7-5 in 10 innings.

He gave up his second and third homers in quick succession Tuesday.

“All around, it’s frustrating,” said Kimbrel, who is 10 of 13 in save chances. “I’ve blown three saves. Those are wins we should have had.”

Jonathan Broxton (1-1) retired three batters in the ninth for the Reds’ fourth win in five games.

The comeback gave Dusty Baker his 1,600th victory as a manager, moving him ahead of Tommy Lasorda for 18th place on the career list.

The Braves led from the first inning until Kimbrel’s last few pitches.

Brian McCann singled with the bases loaded in the first inning — the first hit of his injury-shortened season — as the Braves pulled ahead 3-0 against Homer Bailey. Kris Medlen limited Cincinnati to four hits in seven innings, including Choo’s solo homer.

Medlen has five quality starts in his seven appearances, but only one win. Mesoraco’s homer snatched away another.

“Anytime we’re here, the ballpark is kind of an excuse,” Medlen said. “But that Mesoraco fly ball is a fly-ball out in a lot of places.”

For the second game in a row, a Reds starter lasted a season-low five innings. Bronson Arroyo gave up four runs in a 7-4 loss in the series opener Monday night. Bailey allowed four runs on five hits and four walks in five innings, leaving for a pinch hitter in the fifth. Donald Lutz batted for Bailey and singled home a run that cut it to 4-2.

Joey Votto’s double in the sixth extended his hitting streak to 10 games, the longest by a Reds player this season. Brandon Phillips’ sacrifice fly in the eighth cut it to 4-3.

The series matches the NL’s top two teams at striking out. The Braves lead the league with 297, the Reds are next at 268. Cincinnati’s Jay Bruce, who leads the NL with 49 strikeouts, fanned with Votto on third base in the sixth inning. Todd Frazier struck out with two aboard in the eighth.

Andrelton Simmons hit a pair of homers in the series opener and moved up from eighth in Atlanta’s batting order to leadoff. He opened the game with a double and scored the first run. He also made a sensational play in the fourth, diving for a grounder in the hole at shortstop and throwing out Bruce at first.

Simmons also made a barehand catch-and-throw to get Choo at first base in the eighth.

NOTES: The game started after a 35-minute rain delay. … Braves OF Jason Heyward, who had an appendectomy on April 22, took batting practice before the game. The Braves will decide by the end of the week whether he’s ready to start a rehab assignment. … Reds C Ryan Hanigan started a rehab assignment at Triple-A Louisville. He’s been on the 15-day DL since April 21 with a strained left oblique. … Jack Hannahan made his fourth start, all at third base. … It was Choo’s eight career multi-homer game.

Staff Report   RUSSELL, Ky. – Registration has officially opened for the 36th annual Run By The River. Sponsored by... read more