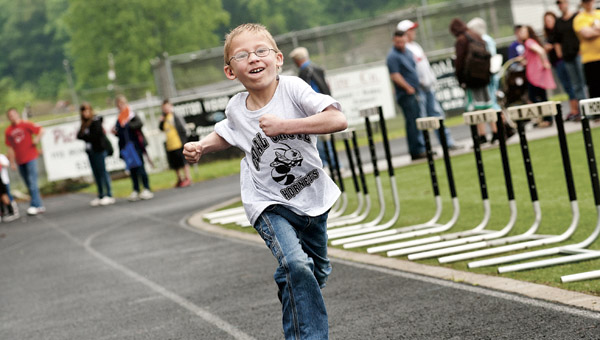 COAL GROVE – Students from all across Lawrence County gathered at Dawson-Bryant High School Wednesday morning for their chance to throw, jump, run or wheel their way to victory and get their hands on shiny new medals.

The overcast skies did not provide much light to reflect off the metal, but the students provided their own light with beaming smiles as they completed their events during the 42nd annual Lawrence County Special Olympics.

One of the athletes, Dustin Johnson, participated in the 50- and 100-meter dash, softball toss and long jump competitions, but said his favorite part of the event was stretching his legs and running.

“This is cool,” Johnson, the 16-year-old Rock Hill High School student, said. “You get to eat and get prizes. I like racing.”

Johnson is diagnosed with Asperger syndrome and mild mental retardation, but he bucks the stereotype and enjoys socializing with fellow contestants on the field, Delita Mullins, his mother, said.

Mullins said she has cheered on her son at every Special Olympics since he began participating in the first grade.

“I love it. I refuse to miss,” Mullins said. “It’s rewarding to see your kid accomplish something like this. It may seem small to someone else, but it’s huge to them.”

When spring hits and Johnson knows Special Olympics season is nearing, Mullins said he begins practicing running and throwing the ball with his father. She said he looks forward to participating and winning medals — of which he has acquired dozens over the years.

All Special Olympics athletes receive medals for their participation. This year’s events were the 50- and 100-meter dash, softball toss, long jump and events designed for multi-handicapped athletes.

State to vote May 29 on distribution   Lawrence County’s general fund could get a $275,000 bonus if the state... read more