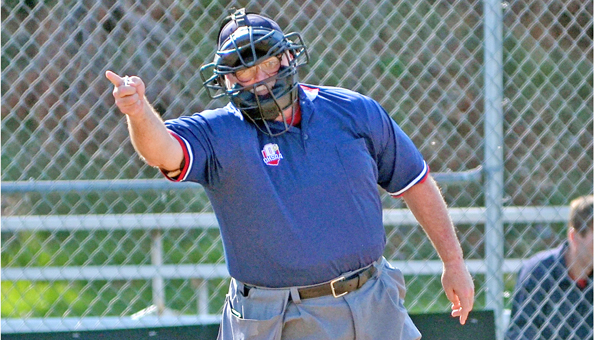 Long-time high school umpire Chuck Delawder called the Green at Symmes Valley baseball game on Wednesday, the final game of his career. Delawder is retiring after 31 years of service to the Ironton chapter. (Kent Sanborn of Southern Ohio Sports Photos)

Rock Hill finished the OVC 9-1. The Dragons — needing a win to keep their title hopes alive — fell to 7-2 in the league. They play South Point on Friday.

“(The team) went up there with all intentions of winning a third title and that’s what they did,” said Rock Hill coach Barry Litteral. “That’s been the goal of this team all year to win a third title. Now it’s on to the tournament.”

Rock Hill (12-6) used the two-hit pitching of Jonathan Joseph to get the win. Joseph struck out 11, walked four and the one run was earned.

“Jonathan threw the ball really well and we played well as a group,” said Litteral.

Fairland (11-8) got a solid pitching performance from Kyle Raines who struck out five, walked one and gave up seven hits.

Fairland took a 1-0 lead in the first inning.

Kyle Sowards doubled to lead off the inning. He went to third on a passed ball and Josh Ross followed with a sacrifice fly.

The score remained tied until Rock Hill scored twice in the sixth inning.

Joseph doubled with one out, Morris was walked intentionally and Dalton reached on an error to load the bases.

Hairston hit a ground ball up the middle and the Dragons were only able to make a play at second base as the go-ahead run scored. Austin Kidd followed with an RBI single.

Joseph and Kidd were 2-3 for the Redmen. Sowards had both hits for Fairland.