Hotel project slated for this year 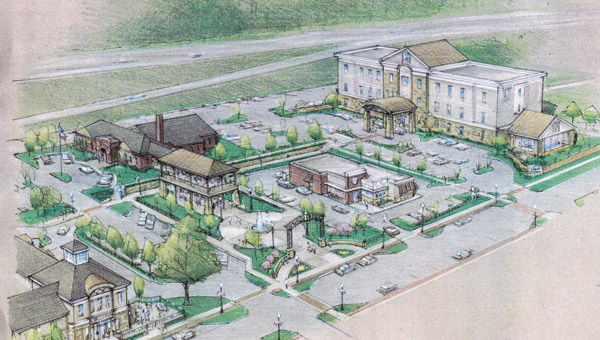 An artist’s rendering of what the Ninth Street development project could look like. Many of the details are still being finalized and the finished design could vary significantly.

Construction of a much-anticipated hotel and at least one new restaurant in Ironton is expected to begin by fall with a completion date of late 2014 or early 2015.

Tentatively planned as a Holiday Inn Express, an official announcement about at least the hotel component will be made within the next 30 days, said Dr. Bill Dingus, executive director of the Lawrence Economic Development Corporation.

“Ironton needs a hotel,” Dingus said. “We are working to bring that to fruition.”

The details of the near $9 million project on Ninth Street in Ironton began to emerge Thursday during the economic development session of the Chamber of Commerce’s annual Legislative Day. The trip, now in its 27th year and virtually unique amongst Ohio’s 88 counties, allows community leaders to travel to Columbus to discuss the past, present and future with state officials and legislators.

Having been in the works for several years by a variety of entities,  the LEDC will partner with two other companies to borrow roughly $5 million for financing the project.

The name of the family-dining chain restaurant that would be a separate but complementary component of this project hasn’t been released yet. This development of several city blocks along U.S. 52 could also include a steakhouse as well as retail space.

These projects and other successes in recent years wouldn’t be possible without strong public and private partnerships, Dingus said.

“We had to hit that 20 percent boundary (the county’s monthly unemployment rate in 1984) before we realized we had to hold hands and climb out together,” Dingus said of the formation of the LEDC and the decades-long effort to re-inject industrial growth into the county.

Lawrence County’s current unemployment rate of 7.1 percent is lower than the state and national average.

Dingus also talked about ongoing efforts to revitalize Ironton’s downtown through developing lofts and apartments in the existing buildings.

“We want to (get) people on the streets,” he said. “The way to do that is to get them living downtown.”

While the focus may be local, the efforts are global.

A delegation of leaders from the LEDC are headed to Germany in June to promote the region and meet with more than a dozen companies interested in expanding into southern Ohio.

“I like to say economic development is like running a marathon without a finish line,” said Viviane Khounlavong-Vallance, assistant director of the LEDC. “You always have to think of your next mile and strategy for the race.”

Officials with the Ohio Development Services Agency — the entity that was formerly the Ohio Department of Development before some of those functions were transferred to JobsOhio — praised Lawrence County leaders for their continual efforts and professionalism that have led to millions of dollars in funding over the years.

Dingus and Vallance shared with the ODSA some of the successes at The Point industrial park in South Point. The LEDC purchased the former South Point Ethanol property in 2000 — a 500-acre park now home to more than 10 tenants and will soon feature a $4.5 million river port.

Both emphasized that infrastructure and regional location were vital to development.

“The river offers our region an unbelievable competitive advantage,” Dingus said, adding that rail and highway access are valuable assets. “The key to all this is logistics. We see that as the magnetic points that draw companies.”

COLUMBUS — Supporters of the long-sought Chesapeake Bypass will go to the state next week to seek more funding for... read more