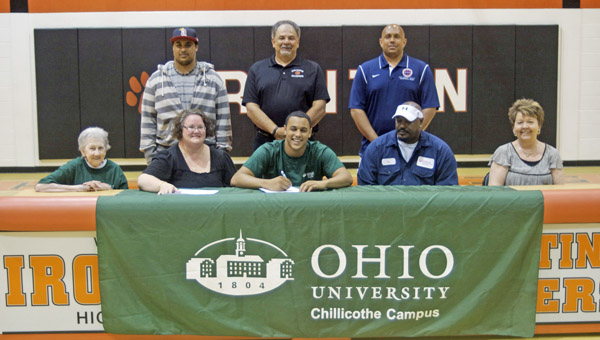 The “other” guy turned out to be “The” guy for Ohio University Chillicothe head basketball coach Rick Uhrig.

While most of the headlines and accolades went to All-Ohio standouts Zac Carter and Trey Fletcher — and rightly so — it was the third man in the Ironton Fighting Tigers’ starting lineup that caught the eye of Uhrig.

In fact, Uhrig attributed the success of Carter and Fletcher to being able to sign Ironton’s 6-foot-3 senior Trevor White to a letter-of-intent.

“What gave us a shot at him was Trevor was playing on a team with three other nice players,” said Uhrig. “If Trevor had been THE player on Ironton’s team and those other guys hadn’t been here, then we probably wouldn’t have been looking 60 miles to the north.”

White was an All-Ohio running back in football and earned second team all-district and honorable mention All-Ohio in basketball. With offers to play either sport on the table, White opted for basketball.

“I was looking at football, too, but I felt the best way to go was basketball because I could do better things with that and get my college degree,” said White.

“Basketball is easier on the body and you don’t have to be there from the first of August until whenever. I think it’s a good decision.”

White said money and playing time were the two key factors in selecting the Hilltoppers.

“The money situation was part of it, too, but the big part was the very first time I talked to coach he said he had a spot for me already. He said you can have it if you want it and I said, ‘Yes, sir.’”

White wasn’t sure what to expect when he went to visit one of Ohio’s branch campuses, but he quickly found it to be a pleasant surprise.

“Their basketball facility is really nice. The campus just blew my mind. It’s pretty nice and the teachers are good, too,” said White.

White proved to be Ironton’s “silent killer” as he quietly put up 10 points and 7.5 rebounds a game. He had several big games during Ironton’s tournament run that ended with a berth in the Final Four.

“Trevor is going to be a nice player for us. He is one of two guys coming in for us that I expect to actually make an impact. We’ve got some pretty decent guys coming back, but there’s a spot with Trevor’s name on it,” said Uhrig.

“I’m just grateful that he played with some other good guys. He was very instrumental in their tournament run. He was the quietest 10-point, 10-rebound kid. I thought he might be a little bit too unselfish. We need to change his mentality when it comes to that.”

White was excited about the future, but he took a moment to look back on the success of the past school year including the tournament run to the Final Four.

“The season was good and the chemistry on the team was good. We had a great run but we came up short. But when all was said and done, I had a great time playing with these seniors. It was a great year for Ironton all-around sports-wise,” said White.

White — who plans to major in education — is the son of Jessica Fitzpatrick and Tim McMillan.

Reds get offensive to beat Brewers

CINCINNATI (AP) — Jay Bruce has been getting pitches to hit all season. Lately, he’s doing something with them. Bruce... read more