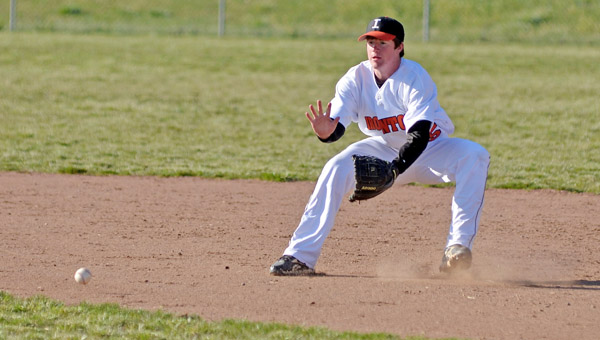 Ironton Fighting Tigers’ second baseman Sean Lawless sets up to field a ground ball. Lawless had a hit in a 4-3 win over River Valley in Saturday’s second game after five innings in a 1-0 first game win over Chesapeake. (Kent Sanborn of Southern Ohio Sports Photos)

With more than a week layoff due to the weather, Ironton struggled at the plate.

But that wasn’t the case for the pitching as the Fighting Tigers picked up a pair of wins on Saturday.

Easterling’s pitching gem followed the combined pitching efforts of Sean Lawless and Derek Battise in a 4-3 win over the River Valley Raiders in the first game.

“Give their guy credit. Bias pitched a good game for Chesapeake.”

Joe Bias struck out five, did not walk a batter and gave up six hits in taking the loss.

Ironton got the only run of the game in the sixth inning. Luke Diamond singled, went to third base on a double by Aaron Stephens and scored when Derek Battise hit a sacrifice fly to deep centerfield.

“We did not hit well today, but we got the timely hits needed to get the win,” said Goodwin.

Stephens was 2-3 to lead Ironton’s offense.

Lawless went five innings and struck out eight, walked two and allowed only four hits. He gave up three runs but only one was earned.

Battise went the final two innings and got the win as Ironton rallied with three runs in the bottom of the seventh. Battise struck out five, walked one and gave up one hit.

“Sean and Derek combined to pitch a good game. We experienced one bad inning in the fourth, but otherwise we played well,” said Goodwin.

Timmy Kemper went five innings for River Valley but was not involved in the decision. He fanned five, walked four, gave up one run and allowed four hits.

Nick Jeffers finished up and struck out two, walked four and all three runs he allowed were unearned.

River Valley took a 3-0 lead in the fourth with the aid of an Ironton error and a two-run single by Austin Barber.

Ironton got a run in the fifth on doubles by Steven Easterling and Trevor Easterling.

The Fighting Tigers then rallied with three runs in the seventh.

Trent Barnett was hit by a pitch, two walks and a throwing error allowed two runs to score. Luke Diamond scored the winning run on a wild pitch.

CINCINNATI (AP) — Don Lutz’s mother didn’t like the sound of his voice when he called her at home in... read more