Children reach out to help Shriners 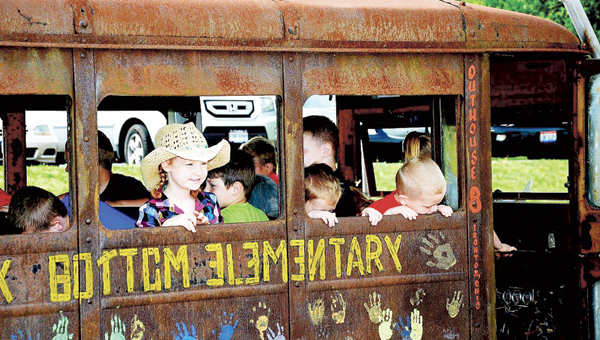 Rock Hill Preschool students have fun in the hillbilly bus during a visit from the Shriners Club. The children contributed $793.38, gathered over a period of a month, for Pennies for Shriners.

PEDRO — Philanthropy is a lesson the Rock Hill School District likes to teach its students at an early age.

And on Friday the preschoolers at the district got a chance to show how well they learned that lesson as they presented the Shriners Club with a donation for their work with children in the community.

That is when the Shriners showed up to the preschool in their well-known hillbilly bus to accept the children’s contribution of $793.38 gathered over a period of a month.

“The students go out for what we call ‘Pennies for Shriners,’” Carrie Jenkins, administrative assistant for Rock Hill Preschool, said. “They collect pennies or anything they can get. Whoever collects the most money is made an honorary hillbilly.”

Part of that honor is receiving a certificate and a hillbilly hat.

The Shriners have been coming to Rock Hill for the past several years with their bus which, the children get to tour and put their handprints on.

“They have a blast,” Jenkins said.

But the Shriners isn’t the only cause the children support. Each year the preschool holds a St. Jude Trike-athon to support the cancer research at St. Jude’s Children’s Hospital.

Last month the preschool raised $644 for St. Jude with George Butler again the top fundraiser bringing in $150 for the Trike-athon.

“We are teaching them to give back and help others,” Jenkins said.

Megan Goff will not get a new trial in the 2006 shooing death of her estranged husband. A one-line judgment... read more